ON September 30, 1948, The Advertiser reported that: “For Adelaide’s gay National Flower Day tomorrow, the Bureau of Meteorology is forecasting cool weather with southwesterly winds and occasional very light showers. The 100 exhibits on North Terrace and King William Road will be floodlit tonight to enable about 450 women volunteers to complete the arrangements and the display will be open for public inspection from 10am tomorrow”. 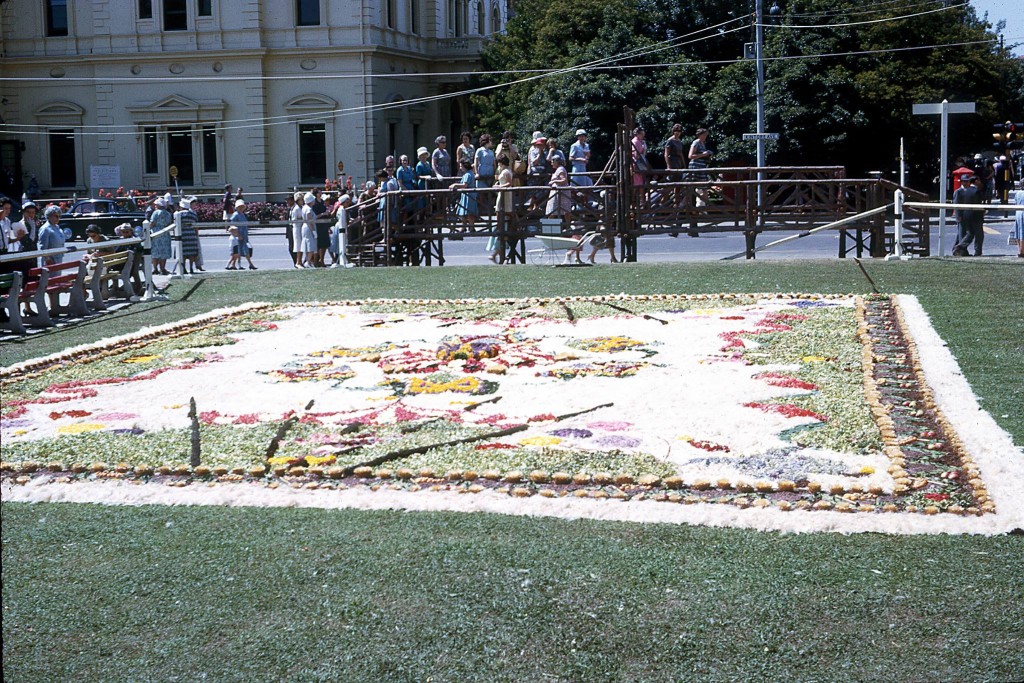 Photo courtesy of Elaine Hall. One of the large floral carpets on display during Adelaide’s Flower Day in about 1964

The article went on to appeal to all citizens to bring flowers to the four city receiving depots for use on the “one million bloom” floral carpet and other exhibits.

“Director of the Government Tourist Bureau, Mr A. Baker, has asked all women to wear sprays and all men to wear buttonholes when they come to the city tomorrow,’’ the story said. “Those not wearing flowers would receive gifts of flowers and pins in the city streets from 8.30am to 2pm.

Flower Day started in Adelaide in 1938 and its original aim was to “promote Adelaide to the rest of the country and beyond the British Empire” and also to encourage homeowners to start planting gardens to beautify the streets of the rapidly expanding suburbs. For the next 37 years, Adelaideans showed great pride in their city by beautifying it with mass displays of flowers every spring.

The War Memorial, the lawns of Government House and Victoria Square were the preferred sites for the event, with millions of blooms collected and used in the displays.

Women gave their time freely and households donated flowers directly or through their children’s schools. The event was mainly driven by volunteers, who encouraged organisations to grow and gather enough flowers to create the massive exhibitions that would change in size, colour and shape each year.

The focal point was always a massive floral carpet in front of the War Memorial on North Terrace but most of the city’s buildings entered into the spirit of the event, with their own floral decorations and pot plants.

Just to give you an idea of the size and scope of the organisation for the day, here’s some more of The Advertiser article of 1948: “Motor trucks will collect flowers from 64 schools this morning while relays each of about 40 women will start at 8am today sorting and sticking flowers to sections of the main floral carpet in a marquee at the rear of the Circulating Library, North Terrace. 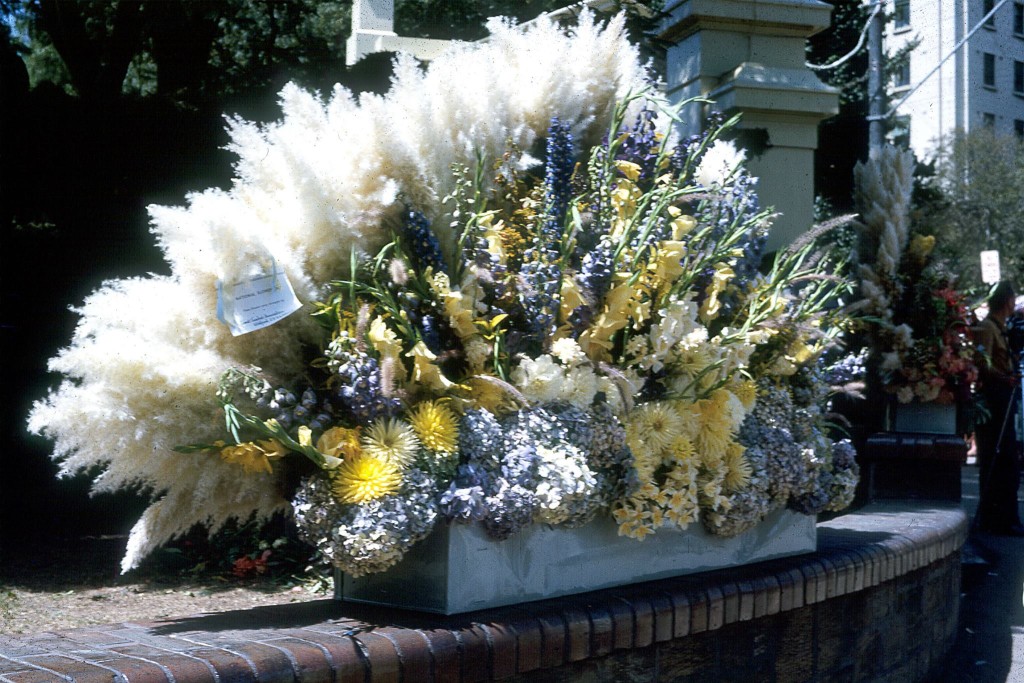 Photo courtesy of Elaine Hall. Many companies and businesses joined in and decorated their buildings with flowers and pot plants on the day

“The Moreton Bay fig leaf background of the carpet was completed yesterday. Mrs Rex Matters, who with Mrs B. Mehrtens is supervising the carpet, said yesterday that if today were hot, the assembly of the carpet on the lawn before the War Memorial would not begin until about 4pm. It would be completed by midnight.”

The last Flower Day was held in spring 1975, by which time it was felt by the organising committee that “Adelaide had grown away from a community function like Flower Day”.

The current Adelaide City Council keeps saying it is always on the lookout for new ways to revitalise the city.

Perhaps in a back-to-thefuture move, the reintroduction of Adelaide Flower Day could be one such blooming good idea.