By Bob Byrne on January 23, 2015 in Childhood Memories

Before iPads, iPhones, tablets and Wii, kids could make up a game with almost anything, including knuckle bones collected from the Sunday roast!

Growing up in the 50s and 60s, the games we played and the toys that we played with were not as expensive or as sophisticated as those of today.

Photo from Museum Victoria and shows four young girls sitting in a circle on an asphalt surface, playing with sheep knucklebones in a government school playground in 1954.

When I see the games and toys that my grandchildren have at their disposal, I often think back to those years when we would make a game out of almost anything and quite often toys would be home-made or hand-me-downs.

We’d spend hours playing ‘bullys’ (some people called it clinkers), using the kernels or seeds from wild peaches. There were games like marbles, brandy or chasey, while the girls would either join in with us or play skippy, hop-scotch or knuklebones. Of course quite often we’d join in each other’s games and I can vividly recall playing knucklebones with my sisters, and I was thinking recently, how a set of 5 sheep’s knucklebones, saved over a period of time from the Sunday roasts, could keep us all entertained for so many hours.

More popular with boys (but again not exclusive to boys) was marbles (also called alleys), which were also quite valuable for trading with other kids.

Cats eyes from memory were the most common, trombolas were the big ones, the white marbles with the red splash were called blood trackers and ball bearings were also used and were known as ‘steelies’. There were also ‘bottlers’, clear glass marbles that were used to seal the old cool drink bottles.

There were several different games of marbles, one where you drew a circle and another game had the shape of an eye with 3 marbles placed in it. You could also play ‘keeps’, which meant the winner kept the loser’s marble (disaster if it was one of your favourites), or not keeps, just a friendly game. 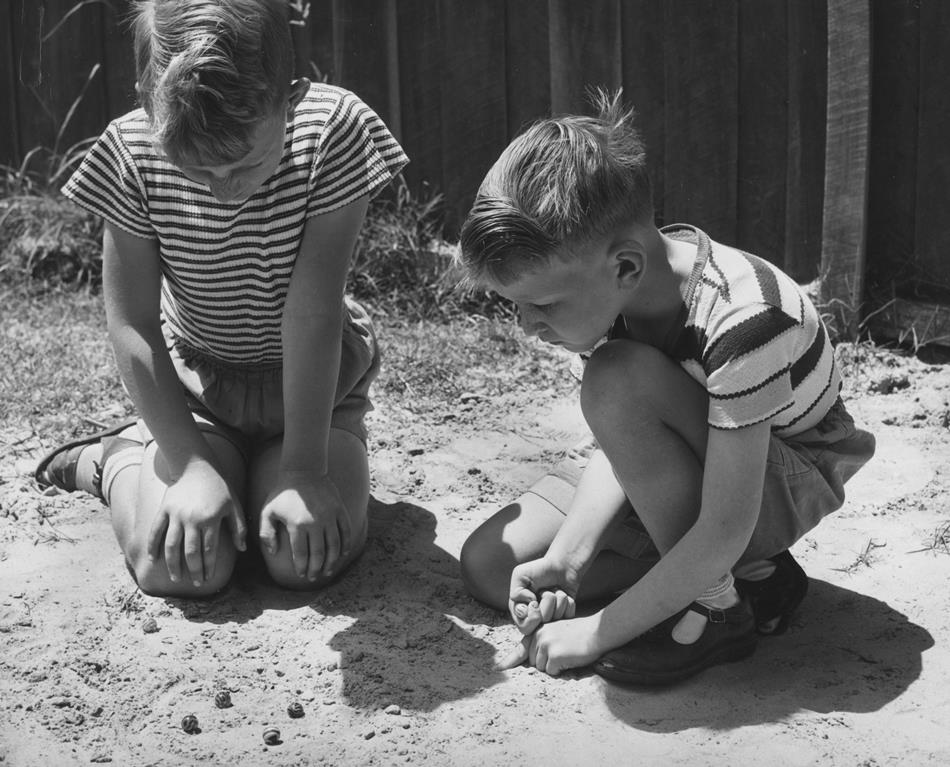 Photo from Museum Victoria and is from 1954. There were several different games of marbles, you could play ‘keeps’, which meant the winner kept the loser’s marble, or not keeps, just a friendly game.

Wow! I’m surprised I can remember so much about marbles seeing I probably haven’t played for more than 50 years!! (Hope I’m not losing mine)!

Some of the other games that come to mind include elastics, hopscotch, ‘piggy in the middle’, squares, red rover all over, what’s the time Mr Wolf? There was brandy, chasey, hide and seek and not to mention all the board games, card games, draughts, snakes and ladders…..so many simple fun games and not an iPhone or iPad in sight.

Somebody also mentioned recently how we would make a kite with some brown paper, a few sticks, a ball of string and flour and water to make the glue to hold it together.

All that was required for kid’s games back then was a huge amount of energy, heaps of imagination, a length of rope, some chalk, an old tennis ball, fresh air, sunshine and lots of other kids,

What games did you play back then and what did you need for the game? Probably a fair bit of imagination but not much else.

Adelaide’s Flower Power
Are We There Yet?

9 Responses to Simple Fun and Games.