Cole’s Cafeteria, Balfour’s Tea Rooms, the Buttery at John Martins and Cox Foy’s Dining Room. Long before the fast food chains arrived in Adelaide, the main emporiums and department stores catered for their customers with a cafeteria style dining room offering the ‘fast food’ of the day.

Ahhh! The memories! To a kid, on a rare shopping ‘trip to town’ with mum and grandma, it was heaven on a stick to be able to choose mains, desert, a drink and to eat something not home-made for a change. 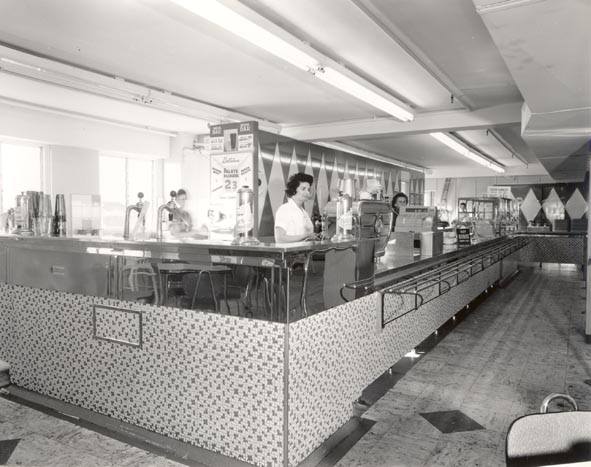 Photo from ARW. To a young child Coles Cafeteria was indeed a wondrous place. It always seemed so large, so many tables and so crowded.

To a young child Coles Cafeteria was indeed a wondrous place. It always seemed so large, so many tables and so crowded. There was a plastic tray which you pushed along the shelf and in front of you the bain marie full steaming hot food, served by the matronly ladies in their her white Coles coats, always offering a large dollop of gravy, “Gravy with that love?”, “Sauce is at the end of the counter dear” and “Lovely manners sweetie”.

Next would be a drink, lemonade perhaps or a milk shake and then of course sweets. I loved my banana splits or mixed sundaes but I always felt more grown up if I selected the trifle because I knew it had a little bit of sherry in it.

Finally, we’d reach the cash register where mum would pay with cash while it was my job to collect the cutlery and then back to the little booth for the feast.

Photo from Baytram 366 on Flickr. For many it was Balfour’s Tea Rooms in Rundle Street. In 1972 the shop was said to be the busiest in the southern hemisphere.

One of our posters, Janet Randell reminisced, “It was such a big deal to go into ‘town’ to shop. Always dressed up and if we were good, went to Balfours for a frog cake! Talking 1950’s here”, while Barb Jamieson wrote “We lived in Broken Hill then, and Adelaide was our annual holiday destination. We always made the trip from Semaphore to the city at least once, and Balfours was always on our agenda.

For Selwyn McCormick it was John Martins cafeteria which was originally in the basement in the late 50s and 60s, “They made a great savoury mince on toast, never been able to copy it, it was great after the Pageant which I was in 4 times while working there. We would all end up down there for a snack, certainly great days. The Buttery from memory was opened early 70s, much more modern for its day but unfortunately never had the same atmosphere.”

Other readers chimed in with recollections, Cox Foys with the roof top funfair where you could get fairy floss after eating in the cafeteria or the old railway station cafeteria where Gail Lane used to eat often; “In the 70s I’d have an egg on toast and a pot of tea for breakfast before starting work at Adelaide Uni. It always seemed so warm and welcoming on a cold winter morning!

In those days Coles variety stores had all of their products on counters with little glass petitions and ladies in the middle to serve you. Little toys, pencils, notebooks, rubbers (we were allowed to call them rubbers then), sharpeners and lollies, powder compacts, nail varnish and lipsticks. All the Embassy or Starlet brand. Every purchase was put in to a paper bag which crinkled enticingly on the bus all the way home. I believe that I had my first white coffee there with my mum when I was 16. I now work with the elderly and they have so many stories about Coles Cafeterias”.

What are some of your childhood memories of those department store cafeterias?

Remember Those Early Years At School?
A Chookhouse, the Dunny and a Hills Hoist.

20 Responses to Coles Cafeteria, Balfours and The Buttery