Who can forget the Queen and Duke of Edinburgh’s first visit back in 1954 when we welcomed the beautiful young queen and her handsome prince to Adelaide for the first time?

Reports from The Advertiser on that day, March 18, 1954, estimated a crowd of some 200,000 people turned out for the start of her eight-day visit, with large numbers lining the route from Parafield Airport.

On Friday, 19 March, the Royal Progress through Adelaide was attended by an estimated 300,000 people. In the afternoon the Royal couple were taken to the races at Morpettville and to the Adelaide Oval for a cricket match between country teams. During the following week the Royal couple visited Whyalla, Port Lincoln and Renmark, and the Queen opened Parliament.

It was also during the visit that a satellite city north of Adelaide was named in the Queen’s honour.

The newspapers were full of the Royal visit and for the week they were here their activities dominated the scene.

The highlight for the children of Adelaide was being bussed to Wayville showgrounds to take part in a special display to welcome Her Majesty. We practiced for weeks at school to form part of a giant tableau which spelled out ‘LOYALTY’, then hundreds of young girls did the wattle dance, young boys ran around and did exercises with the finale, a living flag. It was quite spectacular really and went without a hitch. After that we got to sit on the oval while other school children performed dances and other various acts depicting life in Australia.

And, the first four words of her speech at this gathering went on to become legendary.

“My husband and I, will long remember your enthusiastic welcome, and I wish to thank each of you for the way in which you have shown your loyalty.”

Meanwhile the city was decorated with royal displays welcoming our new Queen. Many of the larger shops and emporiums had gone to great expense to mount their own royal decorations and bunting of  red, white and blue was hung across the main streets.the city spared no expense in welcoming the Royal visitors on their first Australian tour (which was also the first tour by any reigning monarch). 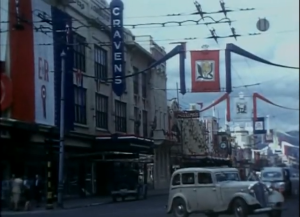 The whole city was decorated in red, white and blue for that first Royal visit.

The visit to Australia was part of the newly crowned Queen’s first official tour, one that took her to Commonwealth nations across the globe.

During her two month stay in Australia she spent 9 days in South Australia, from March 18th to 26th.

What are your childhood memories of that first royal visit and did you take part in the children’s display at Wayville showgrounds?

Glenelg. The Beach From Our Youth
Anne Wills. An Adelaide TV Legend.

2 Responses to Remember the Queen’s First Visit to Adelaide?