On a stinking hot summer’s day in Adelaide, before we were all air conditioned, there was one escape from the heat, the beach.

We are blessed with many fine beaches along the coastline, but most people would head for ‘the bay’. A nice easy drive along Anzac Highway, and as you neared the end of the journey the blue water line would come into view, then the sand, crowded with families all trying to catch a bit of the cool breeze. 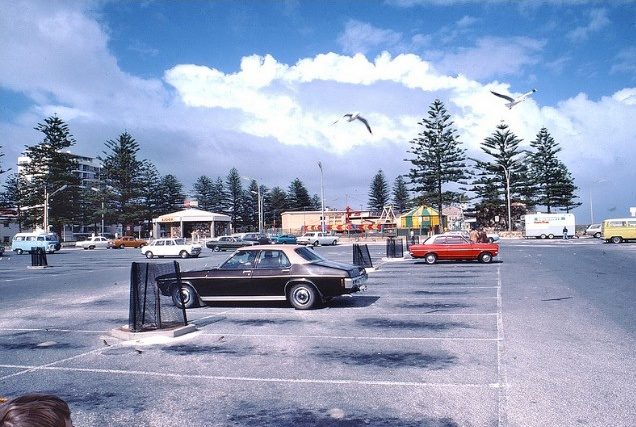 Photo shared by Steve Arnd from ARW Facebook. The old car park at the Glenelg beach, many a lost Saturday night spent parking there.

As teenagers, Glenelg was one of those regular hangouts. I have fond memories of lost Saturday nights ‘hooning’ with 3 or 4 mates, a trip to Burger King on Anzac Highway for a hamburger and Coke and then we’d take a cruise in the FJ to Glenelg to see what was happening at the beach. It seems all so innocent now but back then we were just trying to have a bit of fun and stay out of trouble.

Last year Greg Barila from Adelaide Now and the Advertiser wrote a piece in the Messenger asking “What the hell happened to Glenelg?”

He wrote of how “Car trips to Adelaide from Mildura in the 80s and 90s were a source of great excitement when I was a boy. It felt like an exotic adventure, pointing dad’s old blue Ford Falcon towards South Australia.

And when, after an epic four-hour journey, we finally rolled into the famous City of Churches we usually always stayed in that most exotic of places – Glenelg. Mum and dad often booked us into the Patawalonga Motor Inn, a stone’s throw from the Buffalo and World Revolving Restaurant, and a couple of streets from Jetty Rd.

Glenelg, to put it mildly, was a different place back then. One of the suburb’s main attractions, for example, was a large, magic, fibreglass poo… er, mountain; the old Red Rattlers still made music down the main street and, where great Floridian-style apartments now stand, there was a simple carpark offering unencumbered ocean views.

I’m not sure how, when or why it happened, but someone buggered up the best bits of Glenelg in the years since I first visited as a kid.

I used to enjoy a trip down to the Bay in summer. Now, I largely steer clear of the joint, visit only occasionally and feel sad when I do. A friend calls the place “Hindley Street by the sea”. A tad harsh, perhaps, but I take his meaning.

Moseley Square, with its palm trees, chain stores, Frappuccino’s and golden arches, is the Times Square of Adelaide, the Gold Coast of South Australia. And then there’s the pigeon poo. Jetty Rd, even sans the lovely old cinema, is still a pretty strip. But the shopping precinct – a grab bag of take away food, clothing, chemists, jewellers and camping suppliers – lacks any kind of speciality focus to make a special trip a must, I think”. 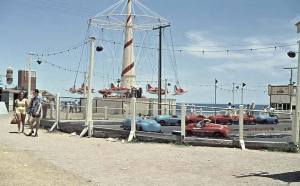 Like Greg, I rarely get to the bay any more and when I do I hardly recognise it.

I understand we must have progress and I’m sure the people who live in the apartment buildings that now block out the view of the beach, love the place as it is now.

What are your memories of Glenelg as you were growing up?

Moores on the Square
Remember the Queen’s First Visit to Adelaide?

17 Responses to Glenelg. The Beach From Our Youth