By Bob Byrne on January 17, 2015 in Childhood Memories

Remember how Monday was always wash day as we were growing up in the boomer years.

My own recollections of the mammoth effort that went into the weekly family wash came back after Mrs M Chamings of Hope Valley sent me a clipping from The Advertiser of some years ago, of people’s memories about washing day. 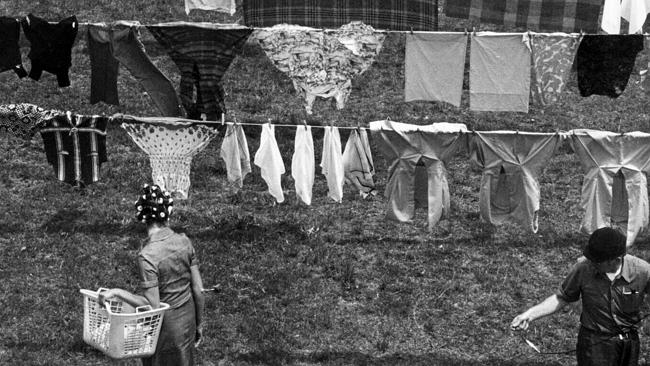 Clothes lines were strung up over the length of the backyard between two poles and could be adjusted for height at both ends.

Even though we had an early-model Pope washing machine with an electric wringer, there still seemed to be a great amount of work that had to be done.

It really started on Sunday afternoon when Dad would begin the process by chopping the wood needed to boil the copper and then setting the fire, ready to be lit.

There would always be extra wood cut and stacked neatly next to the copper in case more was needed throughout the day.

Early Monday morning the copper would be filled with water, usually from the tank, brought to the boil and in would go all the whites.

Whites were always first as the copper bubbled away, carefully measured amounts of Persil or Rinso were added and it was stirred with the big copper stick until everything was thoroughly soaked. 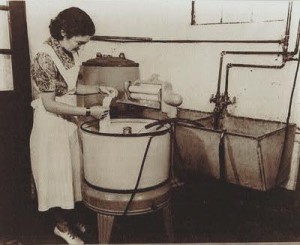 Photo courtesy of Tracey Cole McTeare. It was called the ‘wash-house’ back then

In the meantime the three wash troughs were filled with water, one for rinsing, the socks and other clothes that needed a good soak or a scrub with Velvet or Sunshine soap went into another, while in the third trough would go the Reckitt’s ‘blue bag’.

By this time the whites would be done, lifted out of the boiling copper with the copper stick and into the clear rinsing water, dunked up and down several times and then put through the electric or hand wringer into the blue trough, through the wringer again and into the wash basket which was carried out to the line to be hung.

Clothes lines were strung up over the length of the backyard between two poles and could be adjusted for height at both ends. On wash day, wooden props were also used to support the lines with all the added weight, and later of course the Hills Hoist clothes line would make life so much easier when hanging out the washing.

Petticoats, table cloths, serviettes and doilies were starched before being hung on the line. This required a special mix of Silver Star Starch, mixed to a paste before being dissolved in water and stirred until smooth. It was important to keep stirring the starch to prevent any skin from forming on the top.

Once the big wash was finished all the clothes, sheets, pillow cases and everything that was to be ironed was taken from the clothes line and straight away “dampened down”. I have the vivid recollection of my mother, on a Monday evening, standing at the ironing board with a bowl of water and a huge pile of freshly washed clothes, lightly sprinkling everything. She would then roll them all up tightly, ready for ironing next day

With the advancement of technology and modern day washing machines, the dreaded Monday wash day is now a thing of the past. It is one thing I’m sure nobody misses from “the good old days”.