By Bob Byrne on November 16, 2014 in People and Personalities

In yesterday’s blog post I wrote about jobs that have disappeared over the past 50 years, one of those jobs mentioned was tram/bus conductor.

Last year Adam McCaskill shared a memory on our FB page about growing up in Adelaide. “Does anyone know anything about the old bus/tram conductors who used to ride on the MTT selling tickets in the 50s and 60s. As a young boy I was fascinated by their gear – their uniforms, leather bags, tickets on a metal holder, ticket punches and rubber thimbles. I wanted to be a conductor when I grew up… such a glamorous job (or so I thought!). 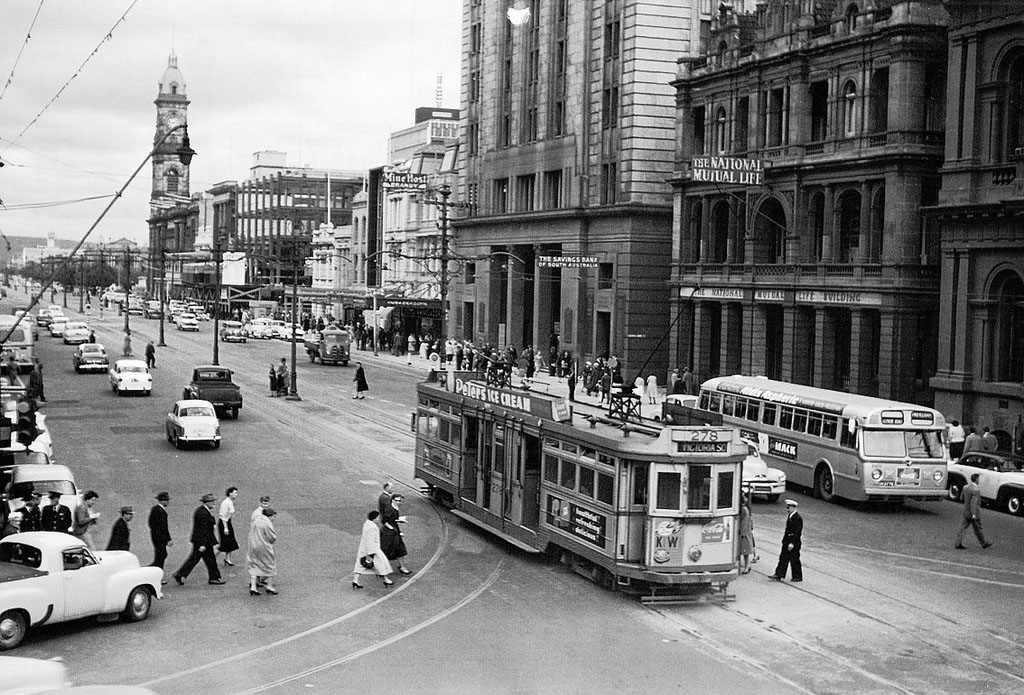 Photo from ARW FB page.
A tram conductor waits for passengers board a tram in King William Street in the 1950s

Adam’s post created great interest with followers who shared their own memories and some wonderful stories about “connies”, as they were called.

Conductors had very close contact with passengers as they moved through the trams and buses taking fares, answering questions and helping people on and off the tram, which frequently had high steps. Good conductors did this in a friendly way and with a smile. The Adelaide Tram Museum carries the story of conductor Arthur Sommers who received a commendation from a family after he helped a young mother off a tram and carried one of the small children to the footpath.

Christine Howard wrote a terrific story; “4.20 pm Gresham Hotel No. 6A bus along Main North Road to Enfield Terminus at Stop 17 (just before Regency Road), 1961 – ’63. My usual bus home after school. The same conductor every day.

An Urban Myth grew up around this man. He was thin as thin could be, stooping in his gait and with an untidy long moustache. Cap pushed to the back of his head he walked front to back and continued that way, one hand on the high rail, forefinger on the bell cord, fingernails long and curling . He never looked us in the eye or smiled and his call sounded like “Fez plis..” but he knew the school kids had passes so he just wandered on. Believe it or not, he always had a rolled smoke simmering away in the corner of his mouth. It would last from the Gresham to the terminus. The ash never seemed to drop.

The Urban myth was that he had inherited one of those huge mansions somewhere facing the parklands and he lived alone in two rooms on the ground floor at the back, with the rest of the house closed down. After we all got off the empty bus would wait for a while then return to the city, so nobody ever followed him to find out where he went. I can still see, hear and smell him to this day. He’s one of those characters that I saw every day for years so he has lived on in my memory. True Story”

And Wayne Pinnegar added a personal touch; “I was a connie on trams but mainly buses in about 1965-66 era, and it was a good job. I remember coming in on a 900 series 3 door Leyland Royal Tiger from Henley Beach with the bus ‘full’, approximately 90 people and having to get off the bus at the rear door so I could get back on at the front to work my way through the passengers again, when the little Italian driver took off and left me behind. I had to catch the next bus to catch up with my bus at Harris scarfe in the city.

There were many funny stories, like the one I heard about drivers as there were so many Italian characters driving buses back then and the story was that if you could ride a bike you could get a bus driving job with MTT.”

What are some of your memories of “connies” when they rode the trams and buses in Adelaide?

Your First Job. Does It Still Exist?
Adelaide’s Disappearing Suburbs