Is the first job you ever had still in existence today?

I started my first job at 15 working for the PMG delivering telegrams in the late 50’s. Telegrams were phased out (I’m not sure when exactly) replaced by fax machines, emails and texting. I was given two brand new uniforms and a Post Office bike, PMG 262 (I remember it still)! Every day rain, hail or shine I’d be out delivering telegrams, chased by dogs and dodging traffic. Today I have to explain to anybody under 40 just exactly what a telegram was.

Lift operators had the job of opening and closing lift or elevator doors by hand and pushing the right buttons, or levers for the required floors. Some wore formal uniforms and gloves, and in department stores they would call out the merchandise as the elevator reached the floor. 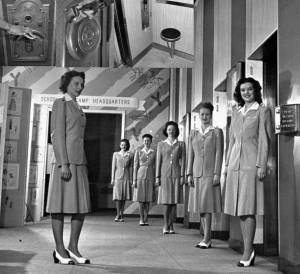 Elevator operators existed in public, private, commercial and retail buildings right up until around the 1970s, when newer buildings were created with more effective lifts that only required the push of a button.

I’ve written before on this blog about home deliveries and the ‘milky’ and the bread man have long since disappeared from suburban streets. The milk bottles and often the money for the order was left outside on the doorstep at night for the milk man to fill. Home deliveries of bread had completely stopped by the late 70s and milk delivery ceased not long after that when people went to the supermarket instead.

There was a time when a lady with a trolley toured the office and brought a cup of tea and a biscuit, a friendly face, a bit of banter and a little bit of gossip. Her job was to make sure office workers weren’t without a cuppa and a biscuit during the day. We had tea ladies until the early 90s at 5DN.

And there was a time, not that long ago, when girls in their teens would get their first office job in the typing pool. Girls were taught at school to do shorthand and typing and how to file. Before computers were widely used, typing was a valuable skill in the workforce. Bigger companies had typing pools and these girls were expected to be quick and accurate.

Another popular job for girls and young ladies was as a comptometrist., adding up figures, processing invoices and acting as a corporate version of a cash register.

Young women would have been given this kind of clerical work in computing sums and processing invoices right up until computers came along and made the job redundant beginning in the 80s.

Connecting telephone users to the correct number by removing and then plugging in telephone lines on large switchboards was the job of the manual switchboard operator. This was back 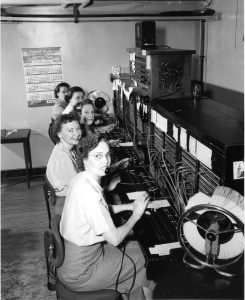 Photo from Google Images. Manual switchboard operators at work in 1952

in the day when to make a call, you rang a switchboard operator, who would ask for “number please”? They then connected the call on your behalf and if it was from a public telephone they would interrupt the call after 3 minutes to ask, “are you extending”?

Switchboard operators mainly started to disappear in the late 50s and 60s as self-dial telephones came onto the market.

So, what was your first job….Most importantly, does it still exist?

Was Life Better in Adelaide in the 1950s?
When We Had “Connies” on the Trams and Buses

6 Responses to Your First Job. Does It Still Exist?