By Bob Byrne on January 10, 2015 in Childhood Memories

Going to school in the 50s, 60s and 70s was a completely different experience from that which our children and grandchildren might have today.

In fact, from the very first day, for many, it was a traumatic event. 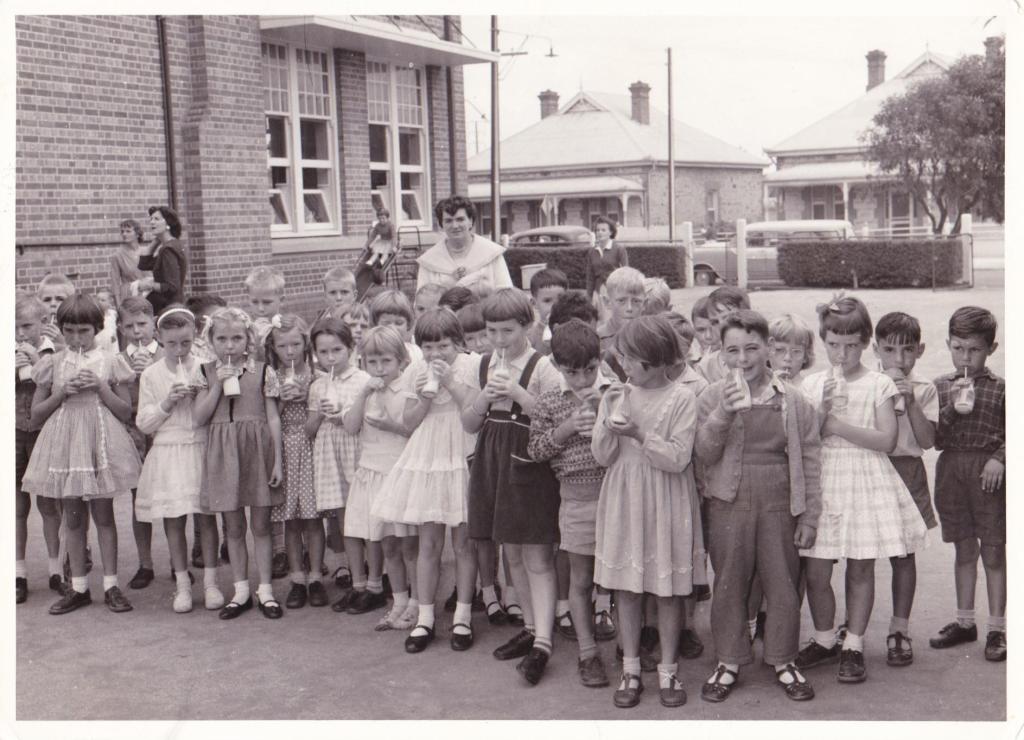 From the cover of the book Adelaide Remember When, school children from Ethelton Primary drinking their school milk

Unlike now, there was not a lot of preschool activity such as play group, kinder gym or day care, so it was pretty much, one day at home as normal with mum and the younger siblings, and the next, thrown in a room full of complete strangers and an adult, also a complete stranger, out in front of the class, telling everyone to be quiet, no talking, do as you’re told.

In a recent post on the Adelaide Remember When Facebook page, many followers of the page joined in with their own recollections of their first day.

Lucy Tipani remembered: “It was traumatic. Thrown into the unknown. I can still see myself running after my mother crying, as she was leaving. But there was a lovely old teacher, Miss Fox, who tried to make it all easier for me, bless her.”

Terina Edwards told this story: “My teacher said at lunchtime ‘you can all go now’. So I did, I went home. I walked the three miles (5km) home and I remember it like yesterday. It was so hot and no one was home, so I had to sit on the veranda until someone came. Mum came running up to me and said ‘where have you been?’ She told me the police had been looking for me all afternoon. When I told her the teacher said that we could go, I thought she meant home, she didn’t actually say to lunch. Mum started to laugh.”

One of the other most enduring memories of those early years at school is the obligatory bottle of milk which was normally drunk at recess time. There was obviously little consideration in those early years of how the milk might be kept for hours without refrigeration.

Each morning at about 9am, steel crates full of these small bottles of milk would arrive and then be left sitting outside, sometimes in the blazing hot Adelaide sun, until recess time at 10.15am. By then the milk would be well and truly off, but that didn’t seem to bother the teachers, who proceeded to make sure that we all drank our one-third pint, every last drop of it!

And school discipline at that time was very different from what passes as discipline today. During those years, teachers had to be treated with the utmost respect, were always addressed as “sir” or “miss”, or by their full title, and generally ruled their classroom with a fist of iron.

In my Catholic school, the nuns simply terrified the kids with the constant promise of eternal damnation in hell and a regular caning, whether you deserved it or not, just to keep discipline. At high school I got the “cuts” at least once a day (as did most of the boys), while the girls got the ruler around the legs, or across the knuckles, mostly for talking in class.

In some government schools the headmaster usually administered the cane but at Catholic schools, every nun could beat you and your parents would not say a word.

From my own observation, school nowadays appears a much kinder and certainly a more gentle place. Children and their parents now would never accept the kind of treatment that we copped as kids growing up in post-war Australia.

What are your memories of going to school?

Remember When the Milky Came Every Day?
Coles Cafeteria, Balfours and The Buttery

32 Responses to Remember Those Early Years At School?