By Bob Byrne on January 9, 2015 in Childhood Memories

Remember when you would be woken each morning to the clinking sound of glass bottles as the milky delivered fresh milk to your home?

It was a daily ritual that lasted right through my childhood and up until the early 80s. Indeed many milkies even continued to use the old horse and cart for the regular delivery until the early 70s at least. 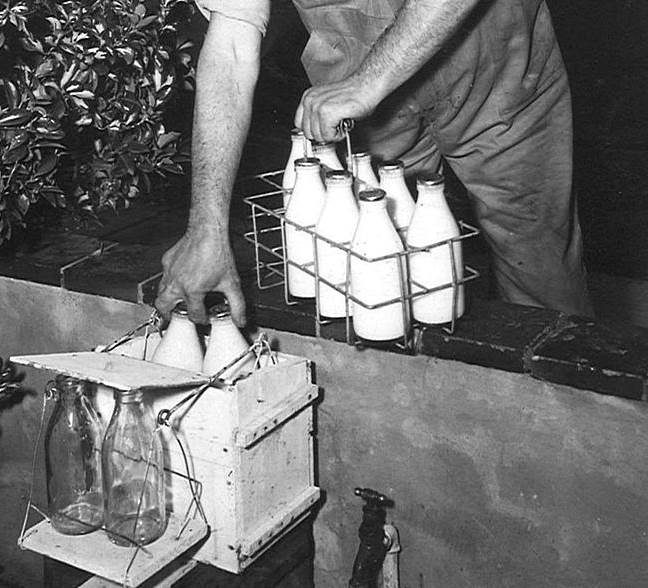 Some people may still recall milk being delivered in a billy which had been put out for the milkman, the milk ladelled out from large milk urns.

Perhaps as we get older our memories begin to play tricks on us but somehow I seem to remember that milk back then was creamier, especially if you were the first to remove the silver foil lid and got to pour the fresh milk from the bottle on your corn flakes first.

I remember too how my mother used to ‘scald’ milk, heat it up in a saucepan until it formed a skin on top which we then used on bread and jam as a special treat.

The dairy industry has always served South Australia well. Up until the Second World War and well beyond, the daily duty for dairy farmers was largely unchanged. Milking was performed twice a day – early morning and late afternoon – either by hand or machine and as the cows were milked, the milk was placed into mainly ten gallon milk cans made from galvanised tin. 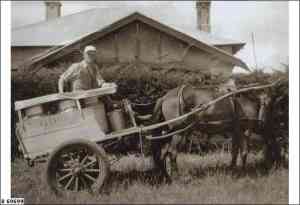 Photo from the Advertiser. Some people may still recall milk being delivered in a billy which had been put out for the milkman, the milk ladelled out from large milk urns.

These cans were placed on wooden platforms along roadsides and were picked up by horse drawn drays or motor trucks and taken to local factories. The cream was placed in churns and sent to factories also.

During the Second World War, governments began to regulate the dairy industry in such matters as pricing, health and safety.

Dairy and factory hygiene were regarded as extremely important to governments, especially after the war, as the population of urban areas grew rapidly through immigration and a rising birth rate, and people demanded fresh milk daily.

The success of co-operatives, such as AMSCOL in Adelaide and Golden North in rural South Australia, led to strong expansion of the overall industry during the 1950s.

By this time a range of products, including powdered milk, were sought for export and local consumption. Each Australian state was self-sufficient in dairy products and there was little interstate competition.

During the 1950s and 1960s, as South Australian farmers applied new irrigation techniques and introduced better pastures, the industry continued to flourish.

By the 1970s most dairy farms had moved to a system of bulk handling for milk and had installed stainless steel vats with refrigeration in their milking sheds in which to store milk.

There was also a strong move to promote dairy products and as large supermarkets became the main form of consumer shopping, the daily ritual of milk delivery gradually disappeared from our everyday lives.

What are your memories of the milky?

The Innocent Times of the Beach Girl Quests
Remember Those Early Years At School?

16 Responses to Remember When the Milky Came Every Day?