By Bob Byrne on November 1, 2014 in Childhood Memories

The telephone has come a very long way, just in our lifetime!

In the 50s and 60s when very few residences had the phone connected, any necessary calls were made from a red public phone box, found dotted around the suburbs of Adelaide. 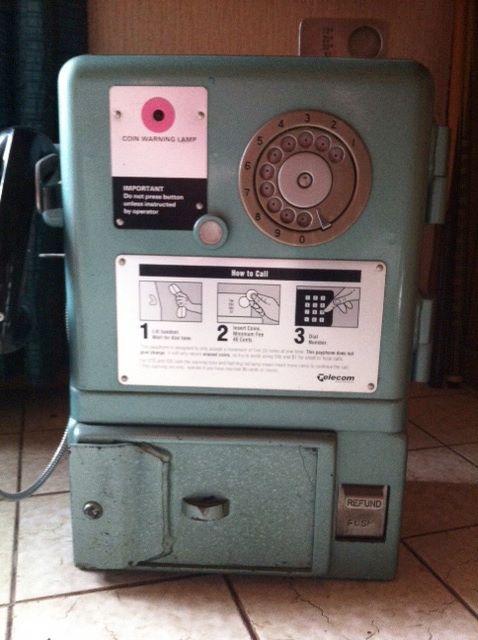 Photo courtesy of Adam Lockhead. ““I can certainly remember those phones, quite often with the damn cord, cut, & only to drive/walk to another, hoping the same fate would not happen!”

Most had the phone book missing, had that faint smell of urine and many didn’t work because they’d been vandalised. You needed a pocket full of 10c and 20c coins, press button A when the party you were calling answered, or press button B if you hadn’t been able to get through.

How on earth did we survive without a mobile phone? And if I remember rightly you had to ring an operator to call interstate on an STD call, and rare overseas calls were very expensive.

I was recalling those primitive telephone days earlier this morning when reading an article in the Advertiser; “Texting Kills Phone Calls” which goes on to reveal that making a call is now only the sixth most common use for a mobile phone, according to recent statistics.

Sending and receiving text messages, reading emails, browsing the internet and using the phone’s alarm clock have all overtaken actual conversation. In fact, almost four in 10 smartphone users believe they could manage without a call function on their handset at all.

The study found the average person uses their mobile phone for an hour and 52 minutes a day. Most of this time is taken up with texting, emails and surfing the web, but around 20 minutes will be spent making an average of three calls.

“…..At the third stroke it will be six eleven p m precisely”. Remember ringing up to get the weather forecast? And there was dial-a-prayer too. 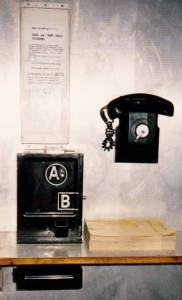 Photo courtesy of Mort Hanson As kids we’d button B in the hope somebody had left behind a shilling, which would buy a big paper bag of mixed lollies at the corner deli.

As kids, when we’d ride our bikes past a public telephone box, we would rush inside to press button B in the hope somebody had left behind a shilling, which would buy a big paper bag of mixed lollies at the corner deli.

Stories of how to get free calls from the public phone were always a great topic as a teenager. Llewellyn Jones recalled recently in an ARW Facebook post, “As kids, we found there were a number of ways to get free calls on the old PMG ‘A’ and ‘B’ button public telephones. One way was to put your money in, press the ‘B’ button when they answered to get the coin back, then shout in the earpiece rather than the mouthpiece and the party on the other end could hear you faintly.  You could also ring 1100 and speak to the operator, tell her you had no money and if she was sympathetic, she would connect you without charge. The other method was to ‘flash dial’, where you would quickly flick the cradle of the telephone the number of times of each digit, for example, if you were dialling 2-0-3, you would quickly flick the cradle twice, then a brief pause, then ten fast flicks, pause, then three times. That way you could bypass the need for coins altogether.” 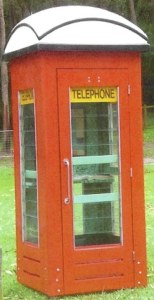 Pamela Jane SchrierI wrote “I can certainly remember those phones, quite often with the damn cord, cut, & only to drive/walk to another, hoping the same fate would not happen! Sometimes, they would be ‘chokkers’ with coins, you couldn’t fit another in, to make your call.”

And as she concluded, “Oh, thank technology, for the MOBILE PHONE. You don’t need a pocket full of coins any more.”

When Mr Whippy Played Greensleeves
Games We Used to Play.

11 Responses to A Time When Phones Were Just Phones