Rundle Mall was absolutely packed on the 5th of July 1984 as some 25,000 fans turned out to welcome British pop star sensation Boy George and his group Culture Club.

There had been bitter disappointment earlier for the band’s local fans when it was announced that the group would not perform in Adelaide due to the lack of a suitable concert venue.

What followed was similar to when the Beatles visited the city 20 years earlier, a local radio station (5AD) organised a massive petition to get the group here and with the help of Countdown’s Molly Meldrum the quartet agreed to a short meet and greet visit only, but no concert. 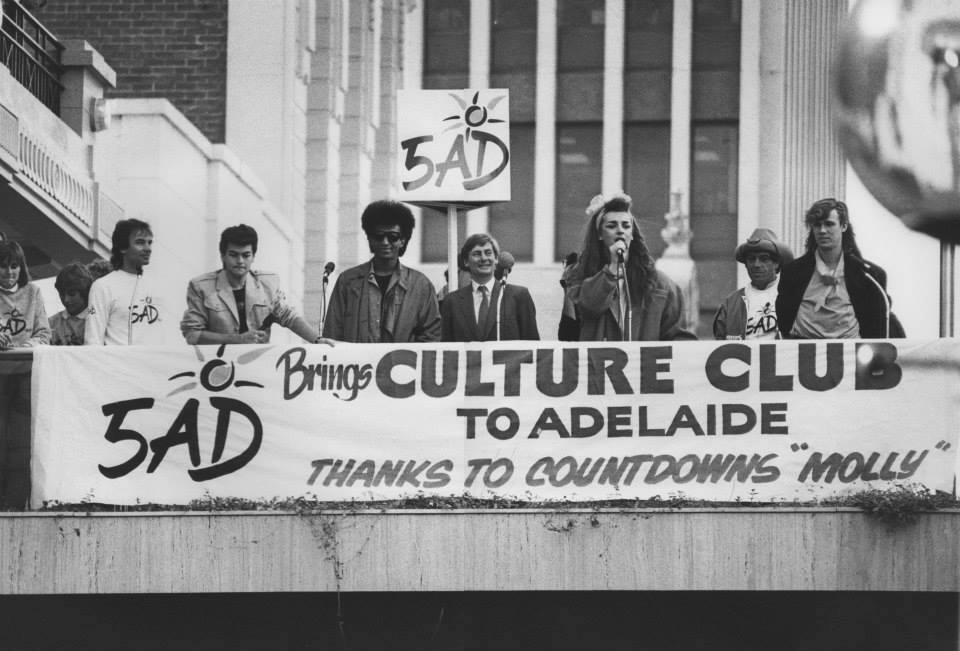 During an interview recently Molly recalled; “the first thing that we did with Culture Club when they came to Australia, before they came into the (TV) studio, was in fact go over to Adelaide which we organised because they weren’t touring Adelaide. So they took the day off on the Thursday, they were here in Melbourne, and so we organised for them to go to Adelaide and then just wave to the crowd in the Mall, and then as it turned out Boy George decided to just do an acapella of 2 songs which just blew everyone away.”

Greg Clark (formerly 5AD) posted the above photo on the Adelaide Remember When Facebook newsfeed; “A big big day for the radio station. 25,000 people in Rundle Mall, the world’s hottest group in town. All the big names are there on the old Richmond overpass (now demolished) – Unforgettable! Picture supplied by a punter. — with myself, Jon Moss, Mikey Craig, John Bannon, Boy George, Ian Molly Meldrum and Roy Hay.”

Posters who recalled the event remembered Boy George wearing a long pink overcoat and apparently the songs he performed impromptu for the big crowd on the day were completely un-rehearsed. 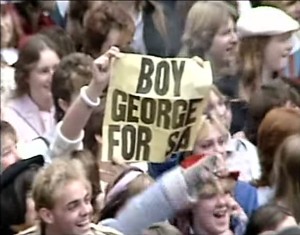 Image from You Tube video. 25,000 fans turned out to welcome British pop star sensation Boy George. Were you there?

Lisa Marker who was doing work experience at the time recalled it as one of the highlights of her teenage years, “Berties was on the same level as the walkway and Boy George walked right past me, so close.”

Others remember wagging school just to be there, including Emma Abbott, “I was there! I was only 12. It was a very good reason to miss school.

Lesley Siciliano wrote “My dad wouldn’t let me wag school to see Culture Club. They missed Adelaide off of their tour and there was a petition to bring them here. Though I think we really wanted a proper concert, not a couple of songs in the mall”.

Were you in the crowd on that July day in 1984 to welcome Boy George to Adelaide?

Radio Days, When Wireless Was King.
Adelaide and the Redex Trials

9 Responses to When Boy George Came to Rundle Mall