On a hot Sunday evening in Adelaide, back in the 1960s and 70s, the street would suddenly fill with the music of “Greensleeves” and from every house, kids would rush out to buy an ice cold soft serve ice cream. 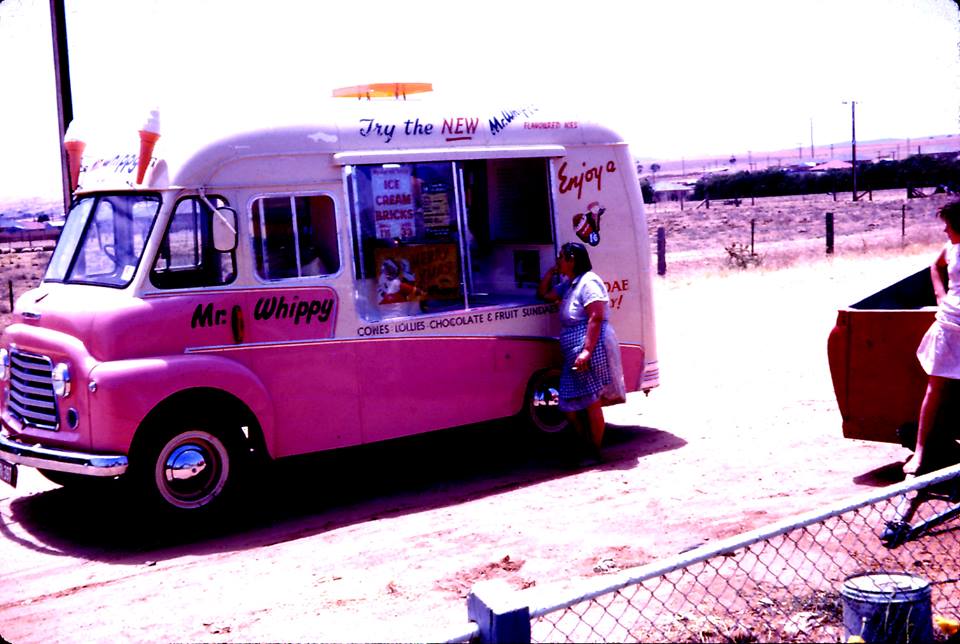 Photo courtesy of Mark Foyle; “Here is a picture of My Mum at the Mr Whippy Van outside of our house in Pratt Avenue Pooraka in the early 60’s – It must have been summer and near Christmas, looking at the advertising on the van. This is before Pooraka was developed and was largely farms and paddocks”

Dipped, sprinkled or plain, it was the highlight of the weekend!

The original Mr Whippy was started in England in the 50s and the company commenced operations in Sydney in October 1962. The bright pink vans were an instant hit with the Aussie public and soon appeared in most capital cities and larger towns. Approximately 200 U.K. built Commer Karrier vans were imported to Australia in the early 1960s. Very few of these much loved original vans have survived today.

The Friend family were apparently the first to own and operate Mr Whippy ice creams vans on the streets of Adelaide.

Almost every Aussie child can remember hearing the familiar tune played as the vans would roll into their streets. Those very early vans carried simple ice cream, during a time when most families did not own a freezer. As freezers became more commonplace, ice cream vans moved towards selling more novelty ice cream items, such as bars and popsicles.

Photo from the Mr Whippy website. Bob Staff serving ice creams in an original van in 1967. The Staff family have been involved with Mr Whippy since 1965.

Early vans used relatively primitive techniques. Their refrigeration was usually large blocks of dry ice so the engine was always turned off when the van was stopped for sales. The chimes were operated by a hand driven crank or a take-off from the engine.

The traditional tune played by Mr Whippy was “Greensleeves” but eventually in many areas was banned from being played in public by strict anti-noise pollution laws enforced by local councils in the early twenty first century. There were also concerns that children were putting themselves in danger by running onto the road to the van and ignoring road safety rules.

Today Mr Whippy vans are no longer allowed to do their traditional street vending but can be hired to attend carnivals, festivals and fetes.

Do you recall running across the hot road, barefooted, to get to the van?  That the ice-cream would melt before you got back home?  And what a dilemma it was to choose whether to have it choc – topped or not?

As a parent, did you dread the sound of “Greensleeves” because it meant you would be hounded for coins? Does anyone recall how much an ice-cream, single or double cost from Mr Whippy back then?

Remember Swinging on the Hills Hoist Clothes Line?
A Time When Phones Were Just Phones