By Bob Byrne on November 2, 2014 in Childhood Memories

Long before the ‘age of entitlement’, children had far less toys to play with, so we made do with what we had. Today it seems almost every kid is given more toys at Christmas and for their birthday in one single year than I collected over my entire childhood.

But if necessity is indeed the mother of invention then at least we learned to be inventive and came up with games that kept us amused for hours. 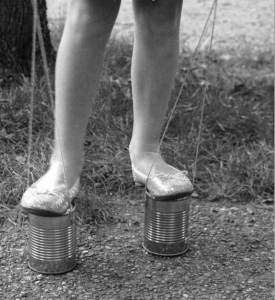 Photo from Google Images. A length of thin rope attached to the same cans would turn them into a pair of stilts.

A couple of tin cans and a piece of string could be turned into a telephone. There was no shortage of tin cans, just had to be sure they didn’t have any jagged edges and there followed hours of fun inventing games that included talking on the ‘telephone.’

After that, a length of thin rope attached to the same cans would turn them into a pair of stilts and more hours of fun having races around the neighbourhood, risking a sprained ankle as we tried to run on the tin can stilts.

A suitable length of rope would provide a skipping rope with all sorts of variations of the game and rhymes to chant.

Mum might collect some of the knuckle bones from the Sunday lunch lamb or hogget roast, and you needed just five of those for an entertaining and very competitive game of knucklebones.

A piece of chalk and a strip of asphalt or cemented footpath was all that was necessary for hopscotch, more popular with the girls in our neighbourhood.

And the girls were more into elastics too. If you could just get your hands on a decent length of elastic (from mum’s sewing basket), two people held the elastic while one person jumped and there were songs to go with the leg actions.

Photo from Google Images. The girls were more into elastics too.

Boys were more into marbles and these were either bought with hard earned pocket money or won by playing ‘keeps’. There were cats eyes, milkies, clearies, steelies, ‘bloodstones’ and the big ones I think were ‘tombolas’. There were lots of different games to play and it could be a fiercely competitive game.

An outside wall could be used for any number of games. We played ball up against the walls with two balls, and three balls if you were clever. We also used the wall for handstands, and the girls with dresses tucked them into their knickers and we’d spend much of our time upside down!

‘Brandy’ was another ball game that was popular. Only one ball required amongst the whole neighbourhood of kids and the kid who was ‘it’ had to throw the ball and hit one of the other kids.

And don’t forget street cricket. One bat and a ball with an old 44 gallon drum as the wicket. Could develop into a pretty serious game at times.

There was street footy too (if you were lucky enough to own a footy) and don’t forget ‘red rover all over, caught 1-2-3’

No wonder we were all so skinny and scrawny back then, I don’t think we ever stopped!

A Time When Phones Were Just Phones
Customer Service, When the Customer Ruled.

3 Responses to Games We Used to Play.