By Bob Byrne on November 4, 2014 in Childhood Memories

Most baby boomers will definitely remember the 5th of November as Guy Fawkes or cracker night.

More recently in Australia Halloween has become the popular celebration at around this time of year, but in the 50s, 60s and into the 70s it was Guy Fawkes Night that was observed.

The story of Guy Fawkes is pretty well known. He and his Catholic co-conspirators tried to blow up the Houses of Parliament on 5th November 1605. News of the plot got out, and a search revealed 36 barrels of gunpowder waiting to be lit.  Following the failure of the plot, a special Act of Parliament was passed creating a day of thanksgiving every year.

The celebration of the day was brought to Australia by our English and Irish ancestors and regardless of the fact that in Britain it is relatively safe to have a bonfire at this time of year, in Australia it’s exactly the opposite. Late October and early November does not mark the beginning of winter.  It is the beginning of summer here.  The days are getting longer so, especially with daylight saving, you can’t let off fireworks until after the kids’ bedtime, and it’s too hot to enjoy a bonfire.  Besides, most of the country is dry and inflammable.

It was a pretty big event when we were kids growing up though. Any available pocket money would be spent on penny bangers, jumping jacks, throw downs and the more expensive Catherine wheels and sky rockets. Sym Choons in Rundle Street always had the biggest and best range of fireworks, imported directly from China. 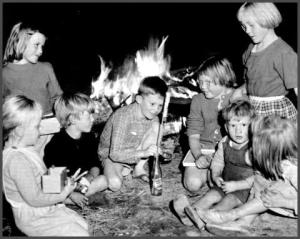 Photo from Google Images. Sixpence or a shillings worth of mixed crackers got you a fairly sizable brown paper bagful.

The corner deli had an assortment available as did the local newsagent. Sixpence or a shillings worth of mixed crackers got you a fairly sizable brown paper bagful.

On the actual day, the whole street would be involved. People would collect anything that was ready to be burned and throw it on the neighbourhood bonfire. Somebody would make a guy, dress him in old clothes and he would sit on top of the pile.

Once the sun went down, the bonfire would be lit and kids would be running around letting off crackers, lighting sky rockets and having a lot of fun.

Thinking back now, I can’t believe how dangerous it must have all been and there were injuries, some very serious, although I don’t recall anybody ever seriously burned or injured in our neighbourhood.

In the end, Guy Fawkes Night was banned for safety reasons.  For a brief time there was a suggestion that it could be held in May. I have recollections of attending fundraising Cracker Nights at my children’s school, but the idea sort of fizzled out after a few years and the plan was dropped completely. Fireworks were eventually completely banned because they caused too many injuries to children.

Halloween is probably a lot safer in some respects and anyway what’s not to like about a celebration that gives kids a legitimate reason to be out at night, get to  dress up in a silly costume and eat lots of sugar?

Customer Service, When the Customer Ruled.
“You’re Not Touching the Kingswood”!

16 Responses to Remember, Remember, the Fifth of November!