By Bob Byrne on January 7, 2015 in People and Personalities

This is the second of a series of ‘Adelaide’s Favourite Personalities’, part one was posted last month (December).

In that first post I asked readers to nominate their own favourites, the people they felt most personified Adelaide during the baby boomer years. Here are some of the personalities nominated in no particular order;

A newspaper cutting of Anne Wills during her television days

Anne Wills, best known to Adelaide TV audiences as ‘Willsy’, started her career as the weather girl on Channel 9 back in 1965.

It wasn’t long however before her natural talents were recognised and she was making regular appearances on Adelaide Tonight variety show with Ernie Sigley and Lionel Williams. She also presented and appeared on many other locally based Channel 9 TV programs, including AM Adelaide.

She later moved to Channel 7, also as a weather presenter on 7 Nightly News and made regular appearances on Adelaide radio, including co-hosting the 5DN Breakfast Show with Geoff Sunderland.

Anne has been part of the Adelaide entertainment scene for many years and during that time has won a total of 19 Logies, an Australian record.

Voted as South Australia’s ‘best-known and most admired person’ back in the 1980s, Advertiser columnist Des Colquhoun

There was a survey conducted back in the late 1980s to find South Australia’s ‘best-known and most admired person’.

The winner on that occasion was Des Colquhoun, who wrote the front page column for The Advertiser every day for many years.

Most people will remember Des for his incisive and witty articles on the daily trials and tribulations of living and working in Adelaide.

Des started at The Advertiser in 1948 at the age of 17 as a copy boy and later began a four-year cadetship as a journalist. After stints in Melbourne, London and New York he returned to Adelaide in 1966 as the editorial manager, later becoming general manager of the newspaper.

He continued to write his popular column right throughout the 1980s.

Sir Edward Hayward and his family were associated with one of Adelaide’s most-loved institutions, John Martins department store, from 1876. 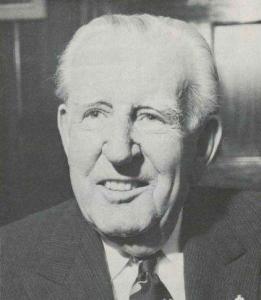 Sir Edward Hayward of John Martins, instigator of the annual Christmas Pageant and recognised as South Australian Father of the Year, despite having no children

Edward was educated at St Peter’s College and joined the family business in 1931.

One of his first duties was to visit North America and gather ideas from department stores in the USA and Canada. The plan for his most enduring legacy, the Adelaide Christmas Pageant, came from that first trip.

South Australia was still recovering from the Great Depression and Hayward wanted to create an event that would help people smile again. He conceived the idea of a parade of floats based on fairy-tales and nursery rhymes with marching bands escorting Father Christmas to John Martins.

Since the first Adelaide Christmas Pageant was held in 1933 it has become a much-loved annual tradition.

Sir Edward was a great lover of art and built up a world-class collection of works that he bequeathed to the state, along with his home ‘Carrick Hill’.

In 1973 he was recognised as South Australian Father of the Year, despite having no children, for his role in bringing so much joy to the children of Adelaide with the Christmas Pageant. He died in 1983.

Read All About It…Get the News Hee-ya!!
The Innocent Times of the Beach Girl Quests