It was in the ’70s and ’80s when the Largs Pier Hotel began to establish its reputation as an important meeting place for some of the truly great Aussie bands of the day, such as Jimmy Barnes and Cold Chisel, AC/DC, The Angels and Lobby Lloyd and the Coloured Balls. All played there in the early days as they began to establish their careers. It really was the pub that rocked! 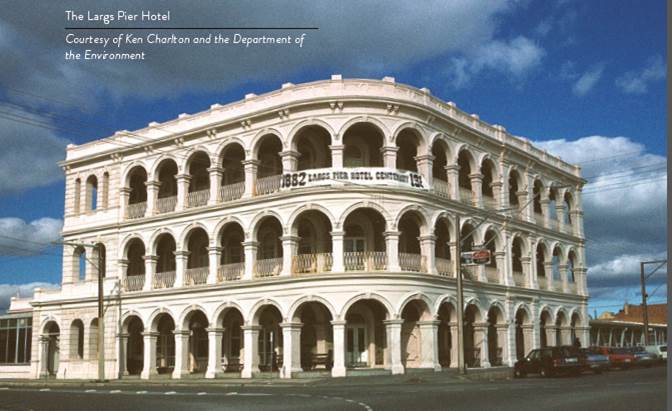 Photo of the Largs Pier in 1982, taken by Ken Charlton from the Department of the Environment

The late Vince Lovegrove, talented muso, band manager and journalist, and his wife Helen ran the entertainment side of the venue in the early 70s, Helen recalls “One memorable night we had Rose Tattoo, Lobby Lloyd & The Coloured Balls and another punk band which caused a riot outside after the gig. The locals didn’t like all the punters who had travelled from all over. There were hundreds just milling around outside looking for trouble, then someone fired a shot into the air and the crowd vanished.”

John Hopkinson was in the crowd that night and also remembers the shot being fired; “There was a guy who got into a fight. He went home and brought back a .22 and fired a shot. Nobody got hurt though”.

Such events did not happen all the time though, it was mainly about the music and the Largs Pier was one of a number of venues offering pub rock, the music of the era. ARW poster Jack Chynoweth remembers that “the lifesavers ran the Sunday night gig. Bands I saw there were AC DC, Lobby Lloyd and the Coloured Balls, Split Enz, Angels, Chisel, Salvation Airforce and Billy Thorpe. Between the Pier, Stage Door at the Shandon and the Pooraka you had a chance to see best Aussie bands of the time.”

Galaxygayle Mullin also remembers those Sunday night pub crawls; “Frangipani Gardens, then on to the Family Hotel at Glenelg, then to the Pier at Glenelg, then onto Leonards. Wow, most of those places have been replaced with some high rise, unattractive, boring apartments…the 70s really rocked!”

From time to time there were also some international acts on stage. I seem to recall that rock legend Del Shannon appeared there during the 1970s.

According to legend, Bon Scott, in the early days of his career lead singer with the Valentines, later with Fraternity and who became internationally famous as the lead singer of AC/DC, met his wife at the Largs Pier Hotel after a gig in 1971.

Jimmy Barnes returned to the Largs Pier in 2011 and reminisced about the good times he’d had in the “wild rock’n’roll pub”.

“I used to come here in ’72 as a 16-year-old, I’d pretend I was 18 to get in the door and come and see Billy Thorpe,” Barnes said. “It’s just amazing to come back here, the heritage and history of the place is the same and it still has the same atmosphere.”

Kevin Foley, local MP at the time, was there with Jimmy to present a plaque, recognising the hotel’s unique place in Australian rock history as the breeding ground of “Australia’s greatest band”.

What are your memories of the Largs Pier Hotel from the 70s and 80s?

When The Wireless Was King.
The Coca Cola Yo-yo Craze… Remember?

21 Responses to The Pub That Rocked. The Largs Pier

Leave a Reply to chris Click here to cancel reply.