Marineland was a marine park that opened at West Beach in 1969 and closed in 1988, in rather controversial circumstances. Feature attractions of the park were the performing dolphins and seals while another of the major drawcards was the famous pelican ‘Mr Percival’ from the movie ‘Storm Boy’.

Even today, 30 years after its closure, Marineland still creates a great deal of passionate discussion, treasured memories of school excursions, staff Christmas parties which were held there, visits with parents and siblings and of course the less than ideal practice of imprisoning animals solely for the purpose of having them perform for public entertainment.

I recall clearly the controversy surrounding the relocation of at least two of the dolphins when Marineland finally closed. In the end they were shipped off to a marine park on the Gold Coast at great expense to the State Government of the day.

Tony Porter, the son of long-time manager of Marineland Bob Porter, recently recalled his father’s time there; “My father managed the West Beach Trust until his sudden death in 1985, after which the place ran down and was eventually closed – although the campaign to stop the capture of dolphins for public entertainment had a lot to do with it, too.

My father was a former British airline exec who had a knack for selling and the ‘gift of the gab’, so was adept at spinning publicity from nowhere.

But in the end it was, as many have observed, a practice whose time had come and gone, and it was right that it ended.

Marineland would never have survived anyway – and fair enough too – but it did a lot to advance cetacean behaviour research.

Head trainer, Simon Latimer, was sought by researchers worldwide for his encyclopaedic knowledge – and like all such people, he loved those animals with a passion. He went to NT to work with the Parks Department up there. For all those that loved Marineland, I have a daughter who could never get the smell of fish out of her head – and to this day can’t abide seafood. 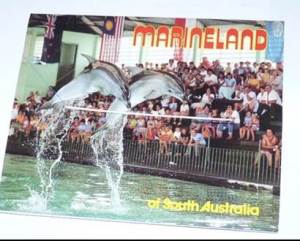 Many people find they still have very mixed emotions about the place. On the one hand it holds so many happy childhood memories and yet the conditions in which the animals were held were (apparently) less than ideal.

Facebook poster Tracey Rees summed up her mixed feelings this way; “I remember going there as a child in the 70’s. I didn’t realise then what cruel and appalling conditions those poor animals endured just for the entertainment of humans. I’m sure my parents would have been very happy to see their tax dollars used to see them live out their lives in better conditions. I remember reading a story about the dolphins feeling sand for the first time. I also remember the controversy surrounding the decision to put down one of the seals because it was in such bad condition and could not make the trip. I for one am now glad it closed!”

What are your own memories of Marineland?

Remembering the Days of the ‘Garbo’
Read All About It…Get the News Hee-ya!!

42 Responses to Mixed Memories for Marineland