I remember before supermarkets and sliced bread in plastic bags, hot, fresh bread was delivered, unsliced of course, by the baker in his horse and cart.

It may be a trick of nature, but it doesn’t seem all that long ago that the baker’s horse, a large, gentle creature that needed no guidance and was loved by all the neighbourhood children, would slowly clip-clop up and down the street, following the baker on his daily round.

I may be remembering the scene through a child’s eyes but life seemed so much more innocent, simpler and slower back then. 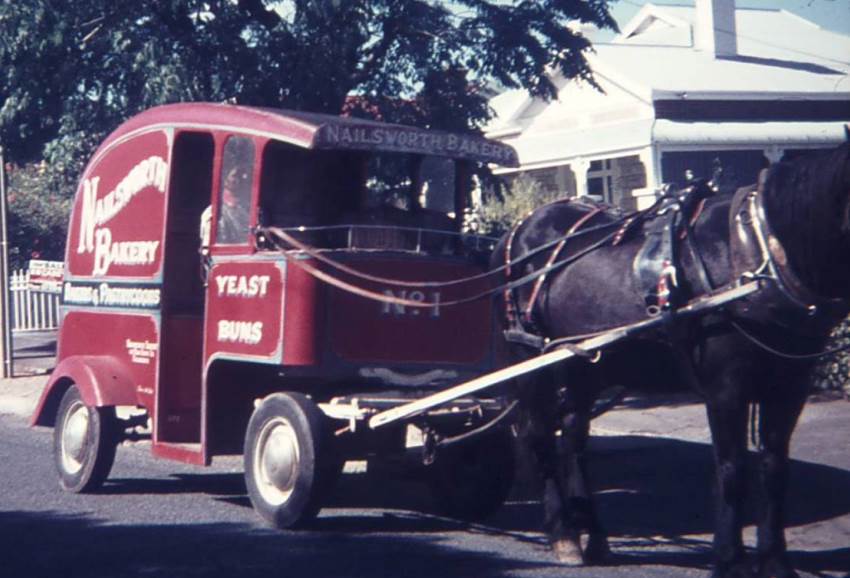 Nanette Mazey shared a photo and a memory of growing up in Adelaide while bread delivery was still by horse and cart; “This was take in the early 70’s in Alpha Road, Prospect. I can’t remember how often they used to come around.” Great photo Nanette, thank you!

The baker’s cart was always brightly painted, with the name of the bakery painted on the side while the interior was lined with wooden shelving on which sat perhaps hundreds of loaves of crusty bread, all baked fresh that morning. The delivery man’s only tool of trade (aside from his knowledge of the round) was the large wicker basket, into which he would place the hot bread and cover with a clean white linen cloth. Each morning the aroma of fresh bread would fill the street along with the smell of the horse and occasionally the odour of a large steaming heap of horse dung, an extra bonus for dad’s vegie patch.

The horse seemed to know exactly when to stop so the baker could refill his basket as he ran from house to house, delivering a loaf or loaves into a bread tin, left on the front veranda. During school holidays all the kids in the neighbourhood would wait at the end of the street and a lucky one would be chosen to hold the reins of the old horse as he slowly meandered along the road. Sometimes too there would be a fresh yeast bun from the basket for the children waiting patiently for their turn. 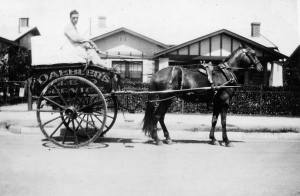 Source ARW. Bread delivery by horse and cart in the late 1940s

It’s sad to think that in this day and age the baker would probably be under suspicion for some crime for touching a child as he lifted him/her into the seat behind the horse, plus there would be the possibility of litigation should a child happen to fall or be in any way injured.

From memory the bread man came every day as bread back then had no preservatives and after just a day or so would be stale. That’s when mum would make her bread and butter pudding with raisins, served with hot custard….I can almost taste it now!

As far as I’m aware bread delivery by horse and cart continued on in some Adelaide suburbs until the 1970s. Gradually though the horses were replaced by bread vans which also eventually disappeared from our roads and now most people simply purchase their bread from a supermarket.

Do you remember the baker delivering bread in his horse and cart?

John Vincent. A True Radio Legend
Rundle Street Before It Became a Mall