Remember Magic Mountain the theme park at Glenelg that opened in 1982? Strangely, it was never a major tourist attraction to the area but was very popular with locals who loved the rides, especially the giant water slides, said to be the largest in the southern hemisphere at the time. 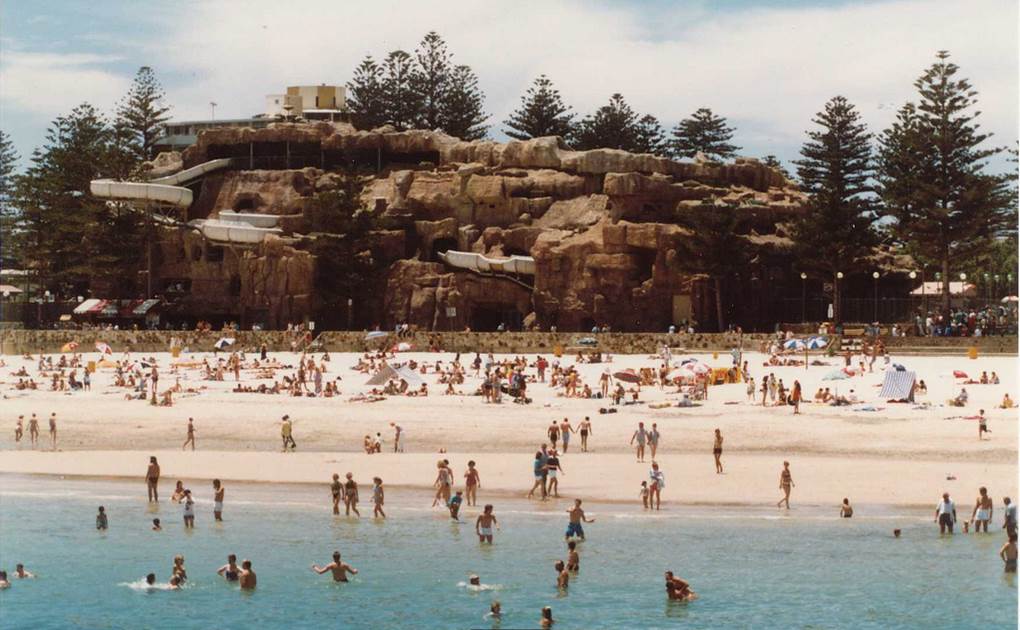 Photo from the Holdfast Bay History Centre. Magic Mountain was likened to a ‘giant dog dropping’.

One of the main criticisms was that it looked like a “giant dog dropping”. Regardless of how it was seen by its critics, thousands flocked there, especially during the summer school holidays to ride the slides and enjoy all its other attractions which included  the historic carousel (which has been preserved), mini golf, bumper boats, dodgem cars, sky cycles, pinball machines, rifle shooting gallery and the video arcade games.

Matt Bubner recalled how he and his friends would ‘hang out in the bay car park at the end of Anzac Highway, meet at Magic Mountain and play all the 20c arcade machines including Midway, 1942, Xevious, Pinballs. We did that for many hours in the old wave shape building down there, and get a pie and iced coffee from the caravan-type outlet in the car park. I was 17 in 1988 and we knew how to have good clean fun, without anyone worrying where we were or when we’d be home”.

John Davies reminisced “My friends and I used to spend every weekend we could afford it there. We’d catch a bus from Athelstone to the city, then the tram to Glenelg. Spend the day at Magic Mountain, and then catch a movie at the cinema, before catching the last tram and bus home.”

And Katrina Rowe wrote “I loved Magic Mountain as a teenager and used to hang around there all the time with my friends, we were too busy having fun to notice if it was “ugly” or not”!

The Holdfast Shores development plan was first signed in 1997 and included multi storied apartment blocks, a hotel and other development and in effect marked the end of Magic Mountain. 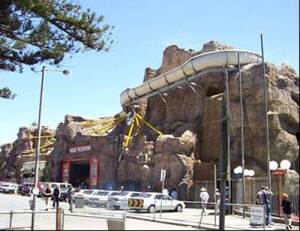 Thousands flocked there, especially during the summer school holidays to ride the slides and enjoy all its other attractions

According to Wikipedia “there was a public-opinion survey in the lead-up to the May 2003 local government elections which, because of the popularity of Magic Mountain, caused the council to rethink its support of the new plan. Their new-found opposition to the proposed beachfront high-rise apartments focused on Magic Mountain as the one parcel of land within the project that was under their control.

The council’s campaign was ultimately unsuccessful and the development received Government approval in early 2004. Magic Mountain closed for the last time on 18 July 2004 and was demolished soon after. The new development included construction of The Beachouse, replacing Magic Mountain, which opened on 1 July 2006.

People still miss it though, even after 10 years. It was part of being a teenager in the 80s and 90s in Adelaide, represented good clean fun and offered a safe environment.

One of the great urban myths that circulated for years about Magic Mountain was that some kids were badly injured when vandals crept in one night and attached upturned razor blades with blue tack, along the slides. However the story was found not to be true.

18 Responses to Magic Mountain, Memories From the 80s and 90s.