The ‘Urban Dictionary’ defines the shaggin’ wagon as “A pimped out 60’s – 80’s van usually comes with a couch, waterbed, strobe lights, lava lamps. Used for the specific purpose of getting laid and/or high.” 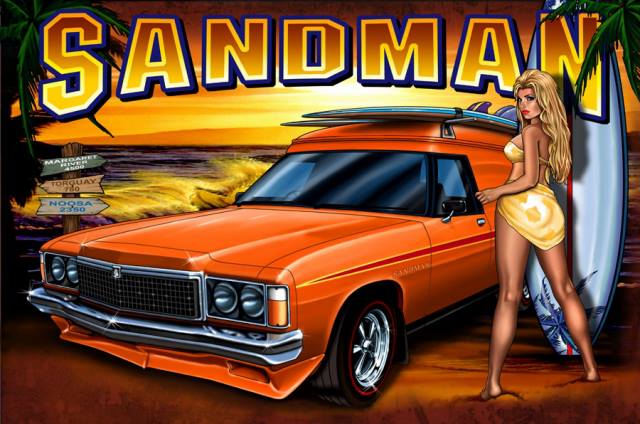 The panel vans would back into the parking bay at the drive-in and everybody knew that “when the wagons a-rockin’ don’t come knockin’”!

Shaggin’ wagons were basically panel vans, painted in bright colours, fully decked out with a carpeted cargo bay (some had a mattress), a sound system and a built in fridge with murals along the sides, sometimes painted with intricate details. They had other nicknames too such as “sin bins,”  “mobile virgin conversion units”, “screw canoes, “Scooby-Doo mobiles”, and “f**k trucks” (you get the drift)! This kind of activity was frequently carried out at the local drive-in. The panel vans would back into the parking bay and everybody knew that “when the wagons a-rockin’ don’t come knockin’”!

Along with the Volkswagon Kombi, panel vans were also very popular with surfers, as it was convenient to sleep in the cargo bay during surfing safaris, as well as carry boards and other equipment.

Panel vans were first released in the 60s but it wasn’t until the 70s that they became Australian cultural icons. The Holden Sandman is probably the best-remembered of these: for example, one of the vehicles driven by Mel Gibson in the 1979 movie Mad Max was thought to be either a Holden Sandman or a customised Holden panel van (apparently a 1975 HJ model in both cases).

Ford also had a panel van, known as the Sundowner, which was popular to a lesser degree. Chrysler, the third car manufacturer also came to the party in 1976, offering a CL model Valiant panel van dubbed the Drifter, but these could not compete with the popularity of Ford and particularly Holden, and were axed in 1978.

Geoff Burrell, writing in Car News earlier this year, on the occasion of the Holden Sandman’s 40th anniversary, recalls that “If ever a car has penetrated the psyche of the young Australian male, then the Holden Sandman panel van ranks right at the top.

Combining youth, freedom, power, sun, surf and sex, the Sandman had it all. There was nothing subtle about a Sandman when it hit the streets in 1974. Its bright primary colours and Sandman decals screamed out a warning to fathers that their daughters might not be safe. It was a sales success right from the get-go. Years later it was immortalised in a postage stamp.

They were fully decked out with a carpeted cargo bay (some had a mattress), a sound system and a built in fridge with murals along the sides

The original designers also wanted to have a mattress as an official Holden option. The then CEO said NO to that idea

The advertising folks did not hold back either. “Suddenly your car becomes your personal pleasure machine” said the brochure. “Lean, lithe and ready to go” shouted the print advertisements. It was a toss-up if they were describing the car or the occupants because none of the advertisements seemed to contain a fully clothed person over the age of 21”.

The 80s saw the end of the shaggin’ wagon. When the Holden HZ ceased production, so too the production of the Sandman was stopped. These days though a Sandman from the 1970s is a prized classic. Original and tidy V8 manuals can go for upwards of $25,000.

3 Responses to The Shaggin’ Wagon – Cars From Our Youth