By Bob Byrne on October 20, 2014 in Childhood Memories

Remember the incredible freedom we had as kids growing up in Adelaide in the 50s, 60s and even the 70s? Once school holidays arrived our parents would rarely see us as we took off for adventures, down the beach, dive bombing off the end of the jetty, swimming in a creek or river, sledding down huge sandhills, riding our bikes down to the dump to search for treasures, playing cricket out in the street and, on a hot night, sleeping out on the back lawn.

Street cricket was always an important part of Christmas school holidays with all the neighbourhood kids, both boys and girls lining up for a bat or bowl. Although we didn’t have proper wickets (it was most likely a 44 gallon drum) and the old bat had seen better days, there was never any denying the enthusiasm shown at scoring runs or bowling someone out. Just occasionally a car would come along, wait patiently while we moved the ‘wicket’, but then it was straight back into it.

Glenelg beach back in the 60s was great a great place for fun and to wander around the side shows or drive the dodgem cars. Miss Goodwin ran the trampolines, and there were the bucking horses and the ‘Gee Whiz’. Have a chicko role for lunch, sitting on the wall and going for an occasional swim to cool off. Remember, as a kid, riding to the beach and stopping at the public phone boxes on the way to press button ‘B’ to see if you could get some money to buy a Coke or an ice cream?

There were organised activities too and most years The Advertiser would hold the sandcastle competitions at either Glenelg or Brighton. Many kids would get to the beach really early to stake out their claim and they’d get as close to the water as possible because that was the best sand. I remember one year entering, although we didn’t want the crown or the honour of winning the crown, we were more interested in any cash prizes that might have been up for winning. Unfortunately our sand castle was a bit of a disaster, got badly sunburned and still had to ride our bikes all the home to Findon!!

Instead of the beach, lots of kids would head to the City Baths for a swim where you could rent a locker for 6d and then fix the key on your bathers with a hair pin. A great treat was having a buttered bush biscuit, laying up on the 3 metre area on your towel and you could get a shot of Brylcream to do your hair after swimming for about 3d. 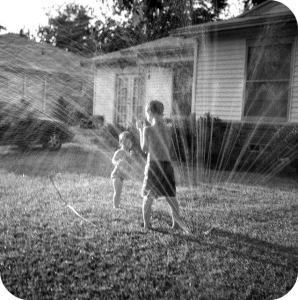 Photo Google Images. There were times when it was just too hot to head off somewhere and on those days we’d make do with the sprinkler on the lawn, getting totally saturated and staying cool.

Of course there were times when it was just too hot to head off somewhere and on those days we’d make do with the sprinkler on the lawn, spending hours just chasing each other around, getting totally saturated and staying cool. There was no air conditioning in those days and we never even had a fan so on a really hot night Dad would bring the wireless (pre TV days) outside on to the front veranda and we would all sit around as a family and listen to the radio serials. Neighbours would wander past and say ‘Good Evening’ and stop and talk about how hot it was. If we were lucky Mum would find her purse and give us kids 2/- so we could go around to the little shop on the corner and buy a cold bottle of Woodies Sparkling Lemonade (The Best Lemonade Made). If it was too hot to sleep inside we were allowed to sleep out on the back lawn, although the mozzies would eventually drive you inside to sleep in the hot house.

What are some of your childhood memories of growing up in Adelaide?

Magic Mountain, Memories From the 80s and 90s.
Adelaide’s Tidal Wave. The One That Never Happened

3 Responses to Childhood Memories of Growing Up In Adelaide