There was some discussion on ABC Radio just recently about the ‘flying saucer’ building that was in Melbourne Street North Adelaide around the 70s and 80s.

It was called ‘Futuro’ and was owned by Derek Jolly, entrepreneur and “larger than life” character who was responsible for much of the development of Melbourne Street in the early 70’s. The building caused something of a stir among local residents at the time who felt it did not fit with the character of the area. (I think I see their point!)

The Futuro site was eventually purchased for the construction of an apartment building. As a result the Futuro was then relocated to Provost Street.

Ed Briedis, the Chairman of The North Adelaide Society sent a photo to the ABC, of the ‘Futuro’ when it was in the carpark behind Deccas Restaurant.

Some of our readers remembered the space ship building quite well while others started to doubt that it ever existed because it was such an unusual building. One poster recalled; “Remember it well because I was a little girl and my father drove me past one day and told me that it was a real spaceship. I could hardly wait to go to school the next day to share this amazing news with my friends … (remember when you did actually have to WAIT to tell people things?! We did have a phone, but definitely off-limits to the kids)”

Another commented; “Those were the days…people like Derek had a real sense of adventure….most of the developments these days are designed to keep the banks happy in order to get approvals…and as a conseqence…boring….”

And still another; “Remember it well and even went inside. My mum used to work at the Magic Flute and Derek Jolly was a good friend of the owner. He would often come around to the kitchen door from the car park to see if there were any leftovers to take to the flying saucer”!

Dave Wally, writing on his regular blog, Weekend Notes commented; The Futuro house was made in the 1960’s and early 1970’s and was a round prefabricated house originally designed as a ski cabin by a Finnish man. It was quite popular originally although ultimately only less than 100 were made.

It certainly polarised opinion at the time, but after Derek Jolley’s death the house was sold and has now “flown” to a remote location at Deep Creek, somewhere in the Cape Jervis area. 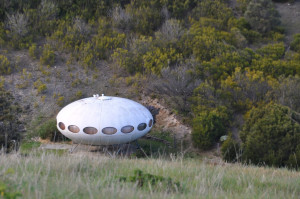 Futuro House in its present location

It’s good to know that this little piece of Adelaide’s recent past has survived and has a new home.

School Milk Programme; One of our most enduring memories
What Did You Order for School Lunch?

13 Responses to The Space Ship Building in Melbourne Street