It was where your father and grandfather went when they needed hinges to fix a banging door, or to get a piece of cut glass to replace a broken window. You could buy half a dozen nails in a brown paper bag or a single bolt with a nut and washer and nothing was packed in plastic. The humble, independent hardware store, it still exists, but sadly, getting harder and harder to find.

These days, hardware shops are more like massive warehouses with their own huge outdoor plant nursery attached. Many have entertainment areas especially for the kids, some have their own cafes and you can purchase everything from pre-packed nails and bolts to flat pack kitchens and completely fitted-out bathrooms. 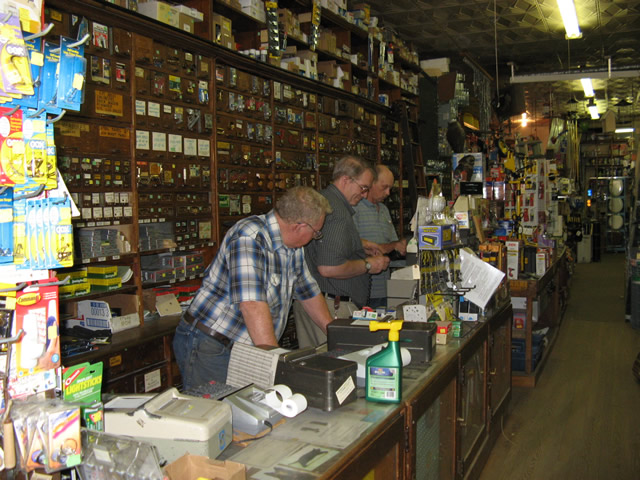 The assistants behind the counter who had worked there for at least twenty years, could put their hand straight on whatever you wanted. Photo shared from Pinterest

But remember when the local hardware store was an Aladdin’s cave filled with shelves containing all sorts of ‘stuff’, trays of nails, odd sized bolts and nuts, screws to hold things up and together and cardboard boxes filled with widgets and knickknacks that might only ever be needed once in a lifetime? There were wheelbarrows by the front door, ladders down the back and the key-cutting machine was generally whirring away in the background. There were rows and rows of ‘bits and bobs’ and the assistants behind the counter, usually men who had worked there for at least twenty plus years, could put their hand straight on whatever you wanted. I used love the smell, hard to describe, but it was so distinctive that you knew you were in the hardware store.

Vicki Lee, posting on our Adelaide Remember When Facebook page recalled how her Dad had worked at Cann’s Hardware on the Parade at Norwood for many years prior to his death in 1976; “He knew where every nail, nut, bolt or screw was, he mixed paint and you could find anything there at any given time. It was a fabulous shop. I can still remember all their names, There was Dennis, Bill, Kevin, Len, and Rocky was out the back on the truck, Ron and David…and many more. A happy and friendly place.”

Vicki’s sentiments about Cann’s were shared by more than 20 people who remembered the Norwood shop with great affection while more than 200 readers joined the conversation with memories of their own hardware shop experience. Gary Coates wrote “I was a rep for Taubmans in 1976 (first rep job) I remember calling on Cann’s ( Lou Cann & Son from memory). Bill Size used to run the paint counter. I saw many changes in the hardware industry over the years and the advent of the big sheds that saw the demise of the corner hardware store. I only retired last year having spent 39 years in the paint industry.”

And Alfredo Malabello commented; “As a boy, electronics was my thing. I used to go to Canns to get my resistors, fixed and variable capacitors, inductors, silicon and germanium transistors, and all sorts of electronic components. I built my first radio with the parts I bought from Canns. Of all the stores I remember and miss the most, Canns on the Parade tops the list. I hope they’ve got one in heaven” 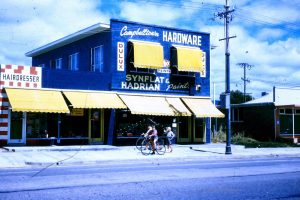 If you’re lucky enough to still have a local, independently owned hardware shop, look after it and support it by shopping there, there are not very many left.

Some of the other hardware shops remembered by our readers included Flint’s in Grote Street in the city, Kimbers on Anzac Parade and Schnieders of Port Adelaide, but almost every suburb had one. Kerri Heness remembered “Mr Balfour had a hardware store on the corner of Prospect Rd and Regency Rd. They had wooden floorboards, all types brooms, they even had giftware” while Lesley Siciliano reminisced “As a child I remember my dad and I going to a small hardware shop on Bagsters Road Salisbury North called Whites hardware. It was owned by the then mayor of Salisbury, Ron White. There was a bunch of shops there, the deli, doctor, hardware store and a haberdashery, all owned locally.”

The wooden floorboards are something that sticks in a lot of people’s memories, that, and the chaos that seemed to exist inside the store. That disarray, it should be noted though, was only in the eye of the beholder. The owners and employees knew pretty much what the stock comprised and exactly where it was. The other prominent memory shared was the service received from these smaller shops. The assistants serving behind the counter were always a great source of knowledge as many had spent most of their lives looking after the customer’s needs and answering their questions.

Apart from the genuine concerns of their regular patrons, they also knew how to handle the young apprentice who was tasked with the job of going to the hardware shop to buy a ‘box of skyhooks’, a ‘left handed monkey wrench’ or a ‘can of striped paint’.

Small independently owned hardware stores flourished in Australia from the 1920s to the 1970s. As late as 1967 more than 95 per cent of all hardware retailers operated autonomously and enjoyed great success. They carved out a lucrative niche with the DIY enthusiasts throughout the boomer years of the 1940s to the 1960s, offering a wide array of tools accompanied by personal service and free advice. But, as with the local grocer and the corner deli, the big chains started to make inroads into the DIY and home handyman markets and by the 1980s the little hardware stores began finding it a struggle just to survive.

These days people no longer go to the ‘hardware store’ on a weekend instead they go to ‘Bunnings’, which can cover a block or more with free car parking and a sausage sizzle.
The buildings are bigger, the prices higher, you have to buy a half-dozen widgets in shrink-wrapped plastic when one would have been sufficient and advice, like the staff, is pretty thin on the ground.

If you’re lucky enough to still have a local, independently owned hardware shop complete with creaky floorboards, chaotic interior, knowledgeable counter staff and great customer service, look after it and support it by shopping there, there are not very many left.

Adelaide GPO and Telephone Exchange
On The (Pokies) Buses and Trains

4 Responses to The Humble Hardware Store