By Bob Byrne on October 17, 2014 in Childhood Memories

Do you remember the yo-yo craze that swept Adelaide (and indeed Australia) back in the 60s and 70s?

There would be very few baby boomers who, as teenagers in those years, didn’t own at least one Coca Cola yo-yo. Not surprisingly, I’ve found that many have kept them as tokens and souvenirs of their childhood.

John Niarhos shared this photo; “Remember these in the local deli”?

The modern yo-yo is generally recognised as an American invention, although I believe its real origins were either in China or the Philippines. Australia was perhaps the most enthusiastic supporter of the fad.

James Cockington writing in the Sydney Morning Herald recently recalled that “the Australian connection began with a Coca-Cola promotion in 1958. The first Australian-released Coca-Cola yo-yos are known as the Duncan Sprite Boy, after the design on one side. It sold for three shillings and nine pence at the time (with six marked bottle tops). These original yoyos are now said to be worth up to $300, depending on condition”.

John Niarhos who sent in the featured photo of the box of Coke and Fanta yo-yos agrees, “The first Coca-Cola yo-yo was introduced in Australia by Duncan 1958. In 1961 the Jack Russell Co took over these promotions and ran them successfully for over 40 years. They sold over half a billion yo-yos around the world

Jack Russell, an American, had worked for Duncan before starting his own Russell Promotions, based in Florida. Coca Cola began to promote the craze by introducing national competitions all around the world and nowhere did these Coke promotions take off the way they did in Australia, where they even allowed yo-yo demonstrations to take place in schools.

There was always a team of so-called international yo-yo professionals, including a team from the Philippines, a Mexican team wearing sombreros and Japanese in kimonos, demonstrating amazing yo-yo tricks that we teenagers were only too happy to emulate.

ARW Facebook poster Julie Flaherty remembers some people from Bogota in South America in Coca Cola jackets “coming to my primary school (Our Lady Queen of Peace in Albert Park) and showing us tricks and giving us free yo-yos. That was in the sixties”.

And Marquess Gerry Treuren recalled; “Not an Adelaide recollection, but I can remember seeing some very weary and bored Philippino yo-yo champions showing all sorts of yoyo tricks in the supermarket on Vale Street next door to the stock and station agent in Cooma NSW in 1977 as part of a Coca-Cola promotion”.

Robert McGowan Bowman says “Walk the dog, rock the cradle … I can still do them. Yo-yo playing Coke reps came to our school in the 60s with their bag of tricks. I remember buying one for 20 cents … must have been post decimal, about 1966. Saw them at a market recently for $20”. 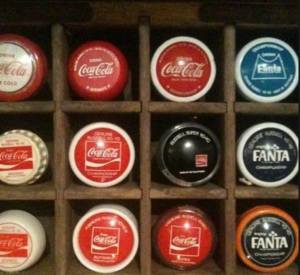 Grant Murrell’s photo; “Here is some of my Coke yo-yo collection, dating from the 50’s through to the late 70’s”

Grant Murrell also sent in a photo of his yo-yo collection “They are set in an old wooden coke bottle crate. I also have the packets of original strings. Another thing I have to go with my collection is a set of old competition posters that were handed out when the yo-yo champions came to the schools”.

The yo-yo is definitely a toy that has survived time and it will most certainly be a toy that will continue to be played into the future.

The Pub That Rocked. The Largs Pier
The Shaggin’ Wagon – Cars From Our Youth