Remember when a day out at the Adelaide Zoo included a ride in the Elephant cart pulled by Samorn the elephant?

Earlier this year there were a number of very strongly worded letters to the Advertiser from people outraged by the suggestion that we needed another elephant at the zoo, so our kids and grandkids could experience what we did as kids in the 50’s to the 70’s. I think most people would now agree that it was a cruel and inhumane existence for poor old Samorn, who from memory seemed to be a very gentle animal, living such a solitary, lonely existence.

On a recent Facebook post Michelle El remembered “We used to run ahead of Samorn and her cart to place peanuts on the top of the fence posts, and she would scoop them up in her trunk as she passed by”. Others recalled that if you put a coin on the post she would scoop that up and give it to her keeper.

Cath Tugger Taylor wrote “I did work experience at the zoo when samorn was there. Poor thing, looked depressed and lonely, her enclosure was tiny and she spent all day swaying back and forth with boredom. Elephants live in herds and should never be kept on their own in small confinement, in the wild they travel hundreds of miles a day and have close life longs bonds within the herd. Seeing her just made me incredibly sad”. 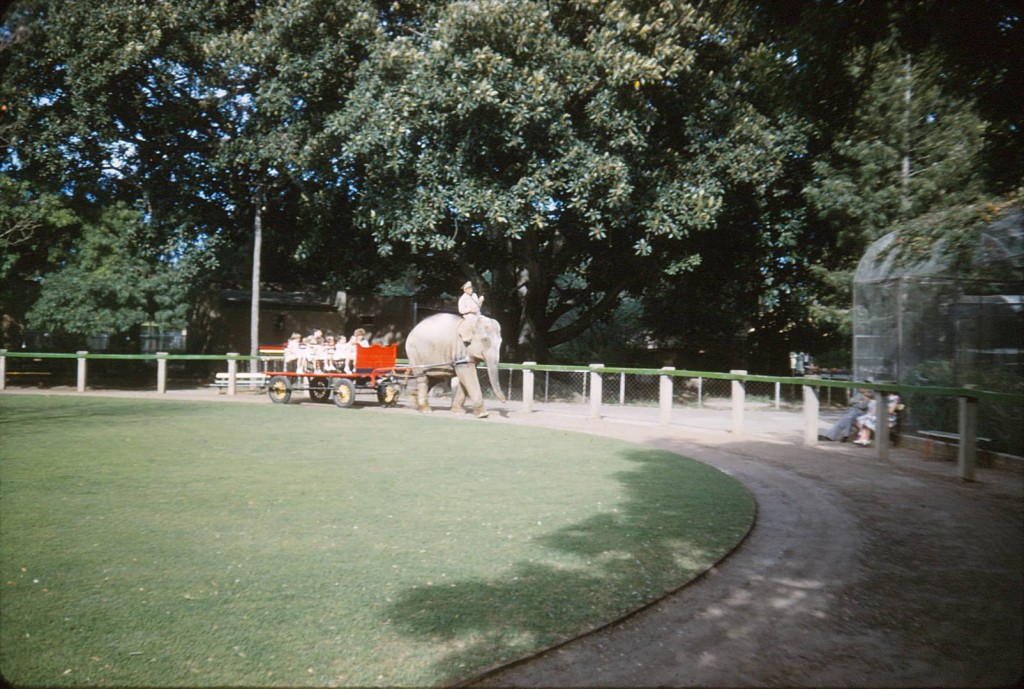 Rumor has it that Samorn drank a bottle of scotch whisky every day to keep her warm in Winter. Her growing tonnage obliged her to rock to and fro to assist her heartbeat. It wasn’t boredom, it kept her healthy. Samorn’s Adelaide career lasted through several eras and much change. The three-tonne elephant retired from the role in 1982 and moved to Monarto Zoological Park nine years later. She died in 1994 and in 1998 her bones were put on display at the University of Adelaide medical school on Frome Road.

In the book “Elephant in our Zoo”, Victoria Raine has written a collection of short stories about Samorn who arrived here in 1956, a royal gift to Adelaide from the King of Siam. “Right from the start she was bright, very observant, curious, and rarely forgot. She formed many staff friends and became very attached to Hero Nuus, her senior keeper, who effectively became her “mahout”. She was a jealous, working, clever and trustworthy elephant both up front and behind the scenes, and would not share her beloved jobs”.
Samorn stopped giving rides in 1982 and was moved to Monarto Zoo in 1991 and died in 1994. ‘Elephant in our Zoo’ is available at; http://www.zoossa.com.au/products/books-cds-dvds/elephant-in-our-zoo Photo thanks to the Gaynor Furnell

What Did You Order for School Lunch?
Tom the Cheap

11 Responses to Samorn, The Elephant in our Zoo