The Advertiser carried a story recently about the average Aussie student of today. Starts the day with cereal, travels by car to school and relaxes by spending time online, favourite takeaway food is pizza or pasta, followed by hot chips.

They are more worried about stopping bullying than any other social issue, followed by having healthy habits, access to the internet and conserving water.

I remember the average student growing up from the 50’s to the 70’s, started the day with Easi Oats porridge (so we could collect the footy cards), Kellogs Corn Flakes or Weet Bix, rode your bike or caught the bus to school, relaxed by spending time outdoors, kicking the footy, playing cricket (for the boys), basketball, skippy, (for the girls), riding your bike all over on the weekend.

Favourite takeaway, I can only remember fish and chips and chikko rolls.

We had bullies at school, but it never seemed to be quite as big an issue as today (no social media). I reckon we had healthy habits but there wasn’t any junk food and we always seemed to have plenty of exercise.

Didn’t have the internet of course and Adelaide water was disgusting, but we drank it anyway because there was nothing else to drink. 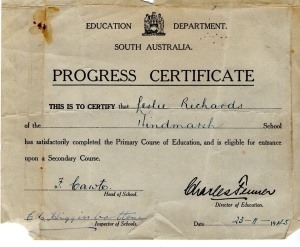 We used to get a ‘Progress Certificate’ at the end of primary school, which then allowed us to ‘progress’ to secondary school

Being the last year of school we became nostalgic and many of us bought autograph books and went around getting these from students and teachers. I still have mine with pithy remarks from various students and signatures of many of the teachers including Charles Woodard the headmaster (who had caned me for breaking the tree branch!)”

Ah yes, I recall the last year of primary school. I think I just scraped through with enough marks in English to make up for my dismal performance in arithmetic. And we did the autograph thing too, “By hook or by crook, I’ll be the last to sign your autograph book”. Simple times!
Read more about David Hunter’s memories of growing up in the 50’s

Going to school in the 50’s and the 60’s was a lot different to today! In those days the teachers were treated with the utmost respect, were always addressed as ‘sir’ or ‘miss’ or by their full title and generally ruled their classroom with a fist of iron.

I went to a Catholic school where the nuns simply terrified the kids with the constant promise of eternal damnation and a regular caning, whether you deserved it or not, just to keep discipline.

Photo from Google Images. At high school I reckon I got the ‘cuts’ at least once a day (as did most of the boys),

At high school I reckon I got the ‘cuts’ at least once a day (as did most of the boys), while the girls got the ruler around the legs, mostly for talking in class. I know that in some schools the headmaster usually gave the cane, but at Catholic schools, every nun could beat you and your parents would not say a word!

It’s safe to say that one aspect of my childhood I did not enjoy was going to school!!!

Treasured Memories of the Old Railway Station
The Gilby Swing Bridge. A Real Piece of Our History

7 Responses to Random Memories of School.

Leave a Reply to jo Click here to cancel reply.