By Bob Byrne on November 8, 2014 in Childhood Memories

Can you recall the trolley buses around the city streets? Particularly in Rundle and Hindley Streets, which were always so busy but so narrow, and continuously packed with people, bikes, cars and trolley buses.

Our trolleybus system was part of public transport around Adelaide for roughly 30 years from the 1930s to the late 1950s. 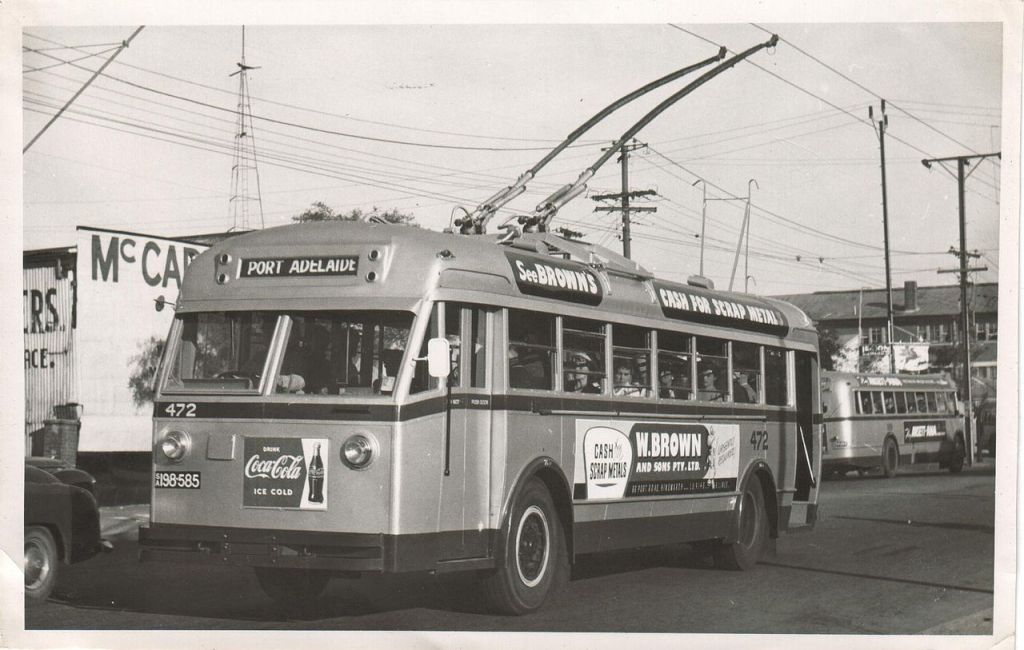 Photo by Doug Colquhoun from Wikimedia Commons. The trolleybus system was part of public transport around Adelaide for roughly 30 years

During the Great Depression, Adelaide’s Municipal Tramways Trust (MTT) needed to expand services, but finances prevented laying new tracks. A decision was made to trial trolleybuses, and a converted petrol bus began running experimentally on the Payneham and Paradise lines. The trial was a success, and a permanent system was opened in 1937.

This new system began operations with a fleet of double-decker trolleybuses running to Tusmore. Extensions to Port Adelaide, Semaphore and Largs Bay were opened in 1938.

You might remember that the drivers of these buses had to use a variety of ‘tools’ to ensure that the trolley poles of their buses took the correct wires especially where routes diverged. Some of those tools were such things as a ‘trolleyboom’, a long stick which was kept on the side of the bus and was used to turn buses around.

Another device was a ‘frog’. This is when the conductor would get off the bus, go to a nearby pole and pull a wire connected to a set of points. This could be a bit hazardous for the conductor because of the heavy traffic, as he’d have to run after his bus to catch it after it had passed through the Frog.

There was also the ‘automatic frog’ which operators were nervous using, as they could easily lose their poles through a slight error in judgement.

Photo by Henk Graalman© from Flickr photo sharing. Used on the trolleybus services to Tusmore, Port Adelaide, Semaphore and Largs.
In service from 1937 to June 1957. Displayed in Victoria Square during the 100 years on transit in Adelaide celebrations.

In a recent post about trolleybuses on the ARW Facebook page, Trevor Martin Bowen remembered riding on the Trolley bus. “I remember boarding the bus in Hindley Street. My father also drove the trolley buses, He tells the story of how he brought the over-head wires down at Botanic roundabout one evening because he didn’t lift his foot off the power as he was supposed to (those were the days when the drivers would hurry back to the depot to knock off to get to the Hackney Hotel before 6pm closing). Needless to say that dad wasn’t popular for causing the hold-up that night.”

Colin Alfred Chessman thought trolleybuses were fantastic. “Very quiet and smooth and good to ride in. They also had very fast acceleration. We used to get a double decker sometimes and stand right at the front on the top deck and watch the world whiz by from the Port into the city. Can’t remember how long it took. I just remember it being good fun. I guess I would have been eleven or twelve.”

And Col Penney recalled “They used to have a turn loop off Hindley Street, that they turned left at ‘Star Grocery’ to Light Square, where the bus did a “U” turn, stopped, pulled the poles down, then used gravity to turn right to go back on to Hindley Street, once again pulling up to allow the conductor to reconnect the poles back to live wires.”

I often catch the bus to and from work in the city these days and I sometimes ponder about the reaction that commuters of today would have to trolleybus transport with its regular stops and starts, poles coming off wires and conductors losing sticks during peak hour traffic.

4 Responses to Did You Ever Catch an Adelaide Trolleybus?