Dad killed the chook, mum plucked and stuffed it and there were real sixpences and threepences in the home-made plum pudding. Christmas dinner (lunch) in the 50s and 60s was quite different to today’s modern festivities. 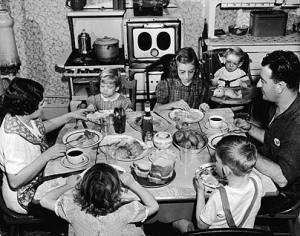 Photo from Google Images. Like most single income families back then, there was never very much spare money about to spend on extras

It would have been a couple of days before Christmas day that dad, having selected the chook that was least productive as a layer, would go into the chook-house. After much commotion he’d finally grab the one he wanted, march outside to the chopping block by the woodpile, grab the axe along the way and quickly chop off its head.

It was almost a ritual each year to then let go of the headless chook and it would take off, running around the yard and scaring the living beejesus out of us kids, who had gathered by the back door to watch the proceedings.

After a short time he would pick up the headless bird and hang it upside down on the line to allow all the blood to run out.

Then mum and grandma (she spent a lot of Christmases with us from memory) would get to work and throw the fowl into a big pan of boiling water before beginning the task of plucking it. I can still remember that smell of wet feathers to this day as the two women would sit in the kitchen chatting as they removed all the feathers.

Next, grandma would gut the chook as mum would start making the stuffing. My grandmother was reared on a farm and I remember how she would stick her hand up into the fowl and then take great delight in removing the entrails one by one, explaining to us kids what each organ was and why it was there.

Once it was gutted, the stuffing would go in, the chook stitched up and it was ready to be roasted in dripping next day, along with the potatoes, pumpkin and carrots to sit alongside the boiled peas (all shelled by hand) and brussel sprouts.

We were similar to most single income families back then and there was never very much spare money about to spend on extras….But at the same time we didn’t expect a great deal, so we were well satisfied with what we had.

Come Christmas morning, it was off to Mass, after which we were allowed to open our pillow cases, in which Father Christmas had left our presents. Then the wood stove would be lit (probably on the usually hot day), and lunch would be prepared. 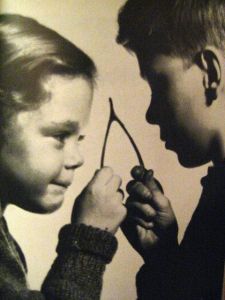 Photo from Google Images. One of the highlights would be who would get the wishbone and therefore get to make a wish,

I can never recall my parents ever drinking alcohol with any meals, even at Christmas, so the only liquid taken would have been a cup of tea. My wife remembers at her home, all the men at the table having a shandy (beer and lemonade)

The two highlights of the lunch were, who would get the wishbone, and therefore get to make a wish and how much you might get in threepences and sixpences from the plum pudding.

Grandma made the plum pudding each year, starting some time in about September. She would make the puddings for every member of her family and have them strung up in small calico sacks in the cellar at the farmhouse. Into each one she would put in a few silver coins and it was always a big bonus to get one of those at the end of Christmas lunch.

I think that Christmases back in those years were a lot simpler and far less commercialised than the festivities of today.

That is not meant as a criticism of the modern celebration. As a matter of fact I love Christmas and the whole celebration of families coming together, enjoying each other’s company and all the joy that brings at this time each year.

May I wish all my readers a very happy and a joyous Christmas!

And please share some of your own childhood memories of Christmas.

9 Responses to Christmas Lunch in the 50s/60s