Did you take part in the moratorium marches in Adelaide from the late 1960s? 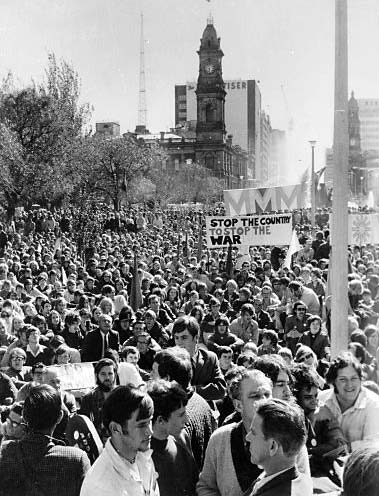 The Vietnam War had its origins in the early 1950s when communist led North Vietnam attempted to re-unite with South Vietnam through military force. In 1960 the United States became involved in the conflict, firstly committing advisers and later sending in thousands of ground troops. It was also in the early 60s that the Australian government decided to join America and commit troops.

In 1964 A new National Service Act required all 20 year old men to register and those selected by a ballot based on birth dates would serve for two years in a regular army unit. The following year the Defence Act was amended to provide that these conscripts could also be required to serve overseas.

Initially there seemed limited opposition to Australia’s involvement, but in ‘65 when it was announced that conscripts would be required to fight, many Australians found themselves opposed to any involvement in Vietnam and even more objected to the use of the conscripts there.

Early on, I recall that there were a few protests and marches which were small, noisy affairs but as the war dragged on and the number of casualties began to increase, more and more people wanted to demonstrate their opposition to the conflict and began to question the very reason for Australia’s involvement.

The first Vietnam Moratorium took place on 8 and 9 May 1970 and over 200 000 people across Australia took part. In Melbourne, an estimated 100,000 marched, led by prominent politician, Dr Jim Cairns. It was a peaceful demonstration with no arrests made.

It was also a defining moment for many Australians who had never openly declared their support for peace groups. It was a very sensitive and divisive issue, many people went against their families’ and friends’ beliefs to march in the moratoriums – some people even disguised themselves so as not to be recognised.

Here in Adelaide, some pro-war protesters also came out on the day of the first Moratorium. They set Viet Cong flags on fire and threw them in among the marchers. 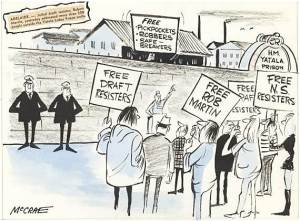 Scuffles between pro and anti- Vietnam groups also broke out.

The second Vietnam Moratorium in September 1970 was smaller, approximately 50,000 people participated and there were violent incidents between police and demonstrators. The third moratorium in June 1971 closed the centre of many of the major cities. By this time public opinion was beginning to turn decisively against conscription and Australian involvement in the war.

In 1972 the ALP, led by Gough Whitlam won government and immediately abolished conscription and freed those who had been imprisoned for resisting it. Whitlam also announced that the last of the Australian troops in Vietnam would come home.

Australian involvement was officially over after ten years.

When King Neptune Lived at Darlington
Where Was Your Corner Deli?