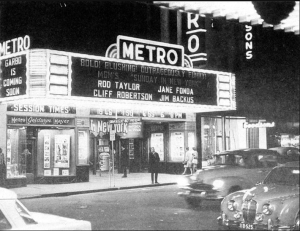 Photo from the State Library. The Metro was closed in 1975 and completely changed by Greater Union – it was painted purple and reopened as Hindley Cinemas.

One of the most beautiful Art Deco style buildings in Adelaide, the Metro in Hindley St, was built by MGM.

It was the only MGM Metro Theatre in Australia to be equipped with fittings sent direct from the USA and was designed by noted American theatre architect Thomas W. Lamb, in association with local architect F. Kenneth Milne.

The Metro Theatre opened in 1939, with a seating capacity for 1,286 patrons in air-conditioned comfort in the stalls, dress circle and lounge.

The seating was especially designed for patron comfort and the colour scheme toned with the pastel brown, beige and gold of the auditorium and the rich burgundy carpets.

On each side of the proscenium, four indented columns diffused amber light which beamed up towards the ceiling.

Here’s a great photo of yet another of our lost picture theatres. The Sturt Theatre was located in Rundle St and originally started its life as The Grand Picture Theatre when it opened in 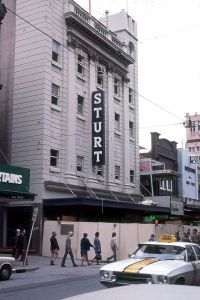 Photo from Frank Hall. The Sturt Theatre just after it closed was renovated and turned into offices

In the early 1930s, the auditorium decorations were changed to an Art Deco style, and the name was changed to the Mayfair Theatre.

Again in the early ‘50s it was modernised and began screening long runs of major films and was renamed the Sturt Theatre. Seating was provided for 700 in orchestra and balcony levels.

The Sturt Theatre was closed in February 1976, and has now been remodelled into offices.

Remember going to the pictures at West’s Theatre in Hindley St? 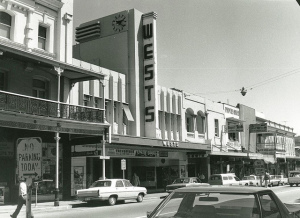 Photo from the State Library of SA. Wests Picture Theatre on the south side of Hindley St in 1975, just two years before its closure.

West’s Olympia was built in 1939 and closed in 1977 when it became part of the Greater Union Hindley Cinemas, which in turn closed as a picture theatre in 1991.

The site then remained vacant for many years, but in 2001 it was returned to its former glory retaining many of its art deco features, in particular the grand staircase that leads up to a mezzanine level in the entrance foyer.

It now houses the Grainger Studio of the Adelaide Symphony Orchestra, continuing its entertainment links.

The Majestic Theatre was “the most modern theatre in Adelaide during 1916”, according to anAdvertiser report of the day.

It was located in King William St and was adjoined to the Majestic Hotel. It remained as one of Adelaide’s leading picture theatres right up until 1967 when it underwent renovations and 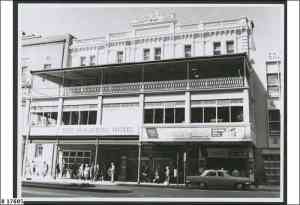 Photo from the State Library of SA. Despite a public petition for heritage listing and protection, the Majestic building was demolished in 1981 and a Commonwealth Bank was built on the site.

reopened as the Celebrity Theatre and Restaurant.

In 1969 there was another change. This time it became a cinema and live theatre and was renamed The Warner Theatre. It closed on March 31, 1979.

Remember the My Fair Lady Theatre in Hindley St which was opened in 1966 especially for the Audrey Hepburn film My Fair Lady?

It was originally owned and operated by Warner Bros, but was later taken over by Roadshow Theatre’s chain, with the name shortened to Fair Lady Theatre. 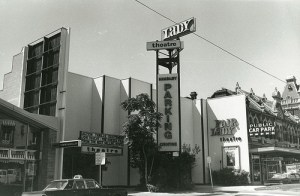 Photo from the State Library of SA. In October 1988, a rock show and disco named ‘Farewell to a Fair Lady’ was held to say goodbye to the building. It was demolished in 1989.

It was finally taken over by an independent operator and was closed on February 21, 1988.

The Fair Lady Theatre was demolished in late 1989.

A small shopping mall was built on the site, which included a 5-screen Greater Union Hindley St cinema, located at the rear that has now also closed.

There have been other movie theatres in Adelaide in more recent times which have also closed including the Imax in Rundle St, Wallis Academy Cinema in Hindmarsh Square and Nova Cinema, which eventually combined with Palace Cinema in Rundle St.

As Wallis program director Bob Parr noted when the Academy closed in 2007: “There’s been a shift in how people go to see films and the suburban multiplexes are where most people are going these days to watch their movies”.

The days of the grand, luxurious picture theatres in the city have all but gone but there are many wonderful memories we can still share about those golden Hollywood years when actors like Mickey Rooney graced the big screen and a when a night out at the pictures was a special occasion to be enjoyed and remembered.

Leave a Reply to Edward Click here to cancel reply.