Remember “Friday night is speedway night in Adelaide!”? And the cartoon “Almost everybody goes to Rowley Park on Friday nights” which showed everyone from a grandmother to ambulance drivers and a jockey all making their way into the speedway. 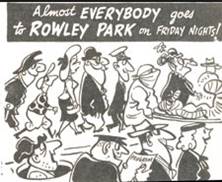 The cartoon that appeared regularly on a Friday in the paper….Friday Night is Speedway Night at Rowley Park

Ah yes, the golden era of speedway with Kym Bonython and his company Speedway Pty Ltd.

In its heyday Rowley Park Speedway was attracting crowds every Friday night upwards of 15,000. In 1965 a reported crowd of 20,000 “Pie Eaters” (Kim Bonython’s nickname for the regular speedway crowd) packed into the speedway to see Australia’s first Demolition Derby. The police were called in to handle traffic and hundreds of fans were turned away as the ‘House Full’ signs went up. The derby itself had 100 entrants and lasted for over 75 minutes.

Bonython himself wasn’t just the promoter and director of Rowley Park Speedway. He was also a speedcar driver who had considerable success winning the South Australian Championship on two occasions. He was also involved in some of the more spectacular crashes seen at the speedway though luckily he didn’t suffer any serious injuries at the wheel in an era when driver safety wasn’t a major concern and major injuries or even death was accepted as just part of the sport.

Regular posters and followers of the Adelaide Remember When Facebook page recently posted their memories of Rowley Park;

Leighton Rutt recalled; “I went there on Fridays nights on many occasions, watching greats like Kim Bonython, Jack Scot (Scotty I think he was called) and many others such as the great Bob Tattersall, Bill Wigzell and Ray Skipper. Those were the days. Hence if you were near the fence I think the term ‘Here’s mud in your eye’ was conceived LOL”!!

Eddie Barton also reminisced; “ The early days of Rowley Park were great entertainment. Nicknamed the “Pughole” because of it’s location and the texture of the surface that the cars, solo’s’, sidecars and the “old stockies” plus “TQ”s raced on. Those early day’s had great “entertainers” on the track who gave there all with the likes of Jack Young (solo) 99 Joe Blow Schubert, Old Smokey, Kym Bonython plus many Interstate and Overseas competitors who judge Rowley Park as one of the best tracks to race at in Australia at that time”!

Rod Harrison wrote; “ We used to catch the train from Salisbury to get to Rowley Park. You could often collect enough empty deposit bottles to pay for your entry ticket plus the train ticket home” and Shaun Oxley commented; “Speedway was never he same after Rowley closed and moved to speedway park. At Rowley Park you were always so close to everything, I remember getting showered by stones and mud every time the cars sped around the bend”.

For Carol Shannon it brought back vivid memories too; “I remember standing right by the fence when I was a kid and the clods of dirt would fly up from the track and you were smothered in wet clay. Your hair was full of lumps of it! I loved it and still love motor sport to this day. We used to go and watch “Jack Larritt” I think his son Jacky drove the car and the family were friends of Dads. Beautiful memories”. 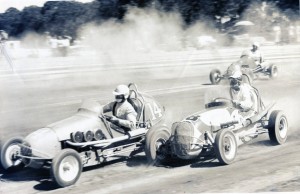 Rowley Park Speedway’s long-time Clerk of Course was Glen Dix, who would later become internationally famous as the man who waved the checkered flag at the Australian Grand Prix during its years in Adelaide from 1985 to 1995.

Due to complaints from residents about noise and the on-street parking, as well as the track becoming too small for the faster cars appearing on the scene, the speedway was closed after the 23rd meeting of the 1978/79 season.

I often pass the housing estate where Rowley Park used to be, on Torrens Road, Brompton (on my way to the football) and I’m immediately taken back to those summer nights with the huge crowds, the smell of the petrol fumes, the cars flying around the track, the noise and the sheer excitement of Rowley Park Speedway.

Who’s Been Sleeping in My House. The 5KA Story
School Milk Programme; One of our most enduring memories

14 Responses to Friday Night is Speedway Night at Rowley Park

Leave a Reply to Tracy Click here to cancel reply.