ON March 12, 1954, the general manager of the Municipal Tramway Trust, Mr J.M. Keynes, released details of the new buses that were being introduced to replace trams in Adelaide.

He added that the steps the MTT was taking to replace trams with fuel buses would “immeasurably improve the city’s transport service”. I’m reminded of the guy who said “Computers? They’ll never catch on”. 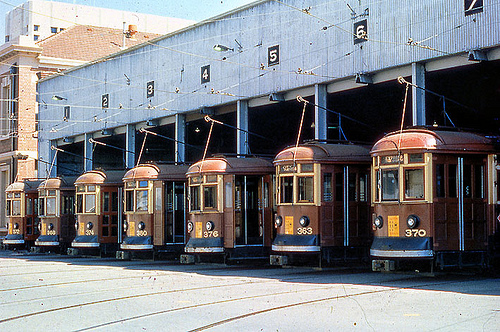 Photo from Baytram 366 Photostream on Flickr. Trams lined up at the old Tram Barn in Angas Street

Trams first appeared in Adelaide in the 1870s and by 1900 there were eight privately owned horse tram companies providing a public transport system running on 74 miles (120km) of track serving the city’s population of 162,000 people.

Late in 1906, the South Australian Parliament created the Municipal Tramways Trust, an entirely new organisation and gave it the brief to establish and run an electric tramway system within 10 miles (16km) of the GPO. At its peak in 1945 the tram system carried 95 million passengers and despite wartime shortages of parts and personnel the MTT kept 97 per cent of its rolling stock available.

By 1951, however, patronage had declined to 78 million, mainly through the effect of the abolition of wartime petrol rationing and the rising ownership of the family car. The early pride at the beginning of the system turned into panic in the 1950s when local councils were reminded that the legislation required councils themselves to cover operational losses. It was, after all, the Municipal Tramways Trust. 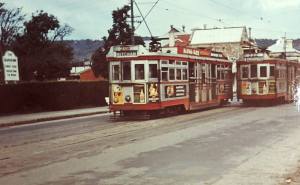 In 1951-52 the MTT lost £313,320 and made the decision to convert the Erindale, Burnside and Linden Park lines to electric trolley buses. The last trams on these lines ran on May 24, 1952, with the lines lifted from April 18, 1953. A 1953 royal commission was held to inquire into the financial affairs of the MTT resulting in a completely reconstituted board. The commission in its report was critical of the Trust for failing to plan for the future and recommended that no new tramways should be built and the operation of the Trust be examined by an independent transport expert and that the municipality-based trust be taken over by a governmentappointed board

Later the same year, with driver safety concerns about the conflict with increasing traffic on the road, the Glen Osmond line was temporarily converted to motor buses. The line was never converted back to trams and much comment was made about the continuing maintenance of unused overhead lines.

Trams were the lifeblood of the Adelaide transport system until the mid to late 1950s but the writing was on the wall. The new board made its recommendations to Parliament and drew up a 10 year plan to replace the entire tramway system, including the Glenelg line with diesel buses. 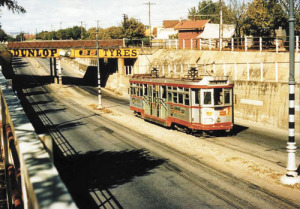 A tram goes through the Goodwood underpass

Fortunately for Adelaide the Glenelg tramline escaped the recommended closure because of its continuing effectiveness, the fact that it actually made a profit each year and the proposed cost of replacing it with a road.

It also became something of a tourist attraction and was allowed to remain as a remnant of the light rail network that served Adelaide so well for 49 years. Its survival also eventually stirred an interest in the revival of a tramway system which now stretches from Victoria Square to the Entertainment Centre on Port Rd with more tracks promised.

4 Responses to Remember When The Trams Ran Everywhere