With the Rolling Stones due to hit the stage tomorrow night for what is sure to be a massive concert at the Adelaide Oval, who can recall one of the other most memorable concerts ever held there, in 1978?

David Bowie’s concert on November 11th that year was made more even memorable by the fact that it was Bowie’s first ever show in the Southern Hemisphere, the first open air gig of the tour and first large scale outdoor concert Bowie had ever played. 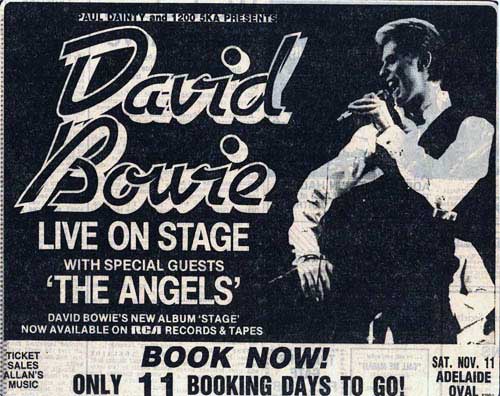 The Adelaide concert was made even more memorable by the fact that it was Bowie’s first ever show in the Southern Hemisphere, the first open air gig of the tour and first large scale outdoor concert Bowie had ever played.

In his diary of the 1978 tour, keyboardist Sean Mayes suggested that the Adelaide Oval concert provided a great relief after the many concrete stadiums on their hectic US and European tours. Sean also recalled that the crowd “was particularly vocal in the second half, throwing streamers on-stage, also a sparkler, a camera sling and a blue puppet wearing a DEVO badge”.

Sean also reflected on Adelaide as a city: “Adelaide was a strange city to my English eyes. The streets were wide like an American town but the buildings were like a European town.”

The concert itself is described on the Bowie Down Under website; http://www.bowiedownunder.com/lowheroes/4.html 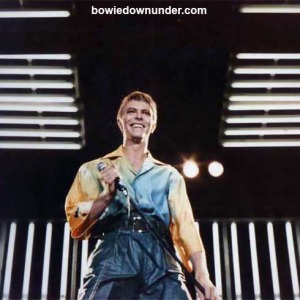 Photo from ‘Bowie Down Under’. David Bowie on stage at the Adelaide Oval

“Being the first concert on the new part of the tour, there was the question of what might be played. Despite having tour reports of overseas concerts, it was not certain whether Bowie would maintain something similar…

As it turned out, the repertoire in Adelaide remained almost identical to the previous leg of the tour – focusing on material from Low and “Heroes“, although ‘Speed of Life’ had now been dropped. The set was effectively divided in two – Bowie announcing:
“We’re just going off for 10 minutes….and when we come back….we won’t be wearing any slippers”.

Colin M, describing himself as a ‘Bowie fan’ wrote, “As the light began to fade support band, The Angels, who were playing to a home crowd, entertained, and were warmly welcomed.It seemed an age between The Angels finishing and a group of musicians walking quietly on to stage and the opening bars of “Warsawa” sounding.

At least in youth, there’s a strong impact of seeing someone who has been admired in the flesh for the first time. They seemed larger than life, almost magical.For me, that Adelaide concert on Saturday November 11 was truly magical. A short visit to Adelaide airport the next day secured autographs of the some of the band.” 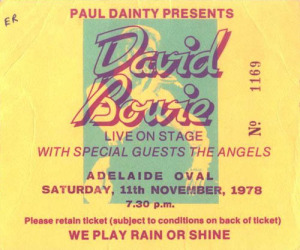 Buzz Bidstrup also shared his memories; “I remember meeting David Bowie at dinner that first night of the tour…all I could say in my star stuck moment was “good soup isn’t it”? We did the whole Oz tour, so by the end we were good friends with many of the band ( and I had managed a few more words to DB by then). Adrian Belew was and still is an amazing guy and drummer Dennis Davis used the expression “far f**king out” to great advantage. The end of tour party at the old Sydney Sebel was a cracker and we met up with some of the guys again when we toured the UK in 1980.”

What has been your most memorable concert at Adelaide Oval?

3 Responses to Adelaide Oval and the David Bowie Concert, 1978