Adelaide made world headlines briefly back in 1976 when Melbourne house painter and amateur clairvoyant John Nash, reported he’d had a vision in which Adelaide and its 800,000 inhabitants were obliterated by an earthquake and tidal wave. Mr Nash claimed that doomsday would be between 10.30 a.m. and noon on 19th January. He was so convinced by his own vision that he sold his house and moved to another state. 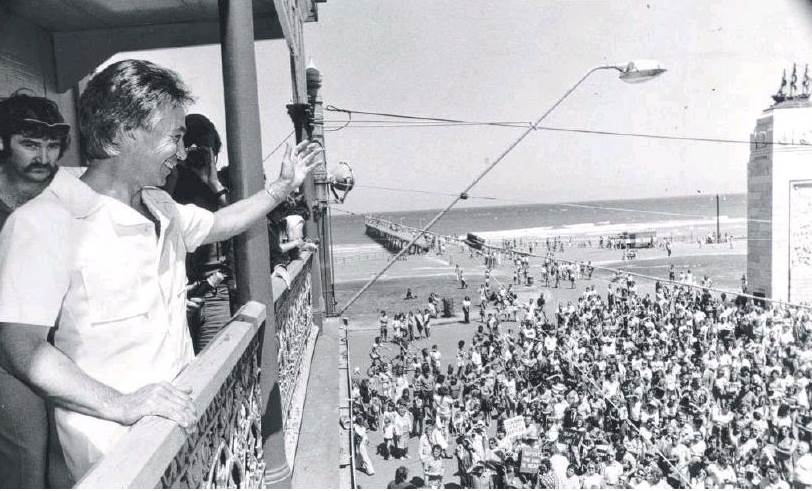 The media got hold of the story and the following widespread publicity caused panic in some sections of the Adelaide community, particularly many non-English speaking migrants, who were reported to have sold up and actually moved out of the city.

People sold off beachfront properties at bargain prices and hotels in the area reported a drop of 75% in occupancy. Many staff members working in seaside establishments either refused to work or took a sickie on the day. There were reports that some parents kept their children home from school and drove to the Adelaide hills with all their posessions in the car and others left town, driving as far as the Riverland.

The BBC from London despatched a television crew to Glenelg to record the predicted catastrophe and media arrived from interstate in their droves, including one Sydney radio station that sent their entire morning programme staff for a ‘live’, on-the-spot broadcast. 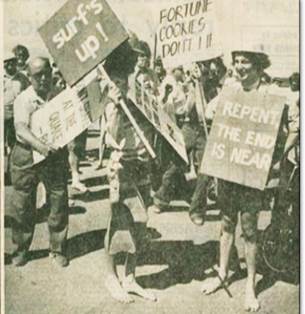 Newspaper clipping from that day. There was a mostly fun mood within the crowd, some carried banners calling for everyone to repent their sins.

When the big morning of the tidal wave arrived, thousands headed to the beach. There was a mostly fun mood within the crowd, some carried banners calling for everyone to repent their sins as the end was nigh, others were dressed in bathers with flippers and goggles, prepared for a swim, still others carried surfboards  while one wag dressed in tails and announced that he wanted to ‘go in style’.

South Australian Premier, Don Dunstan, well known for his theatrics, arrived at the beach about mid-morning, ready to do a ‘King Canute’ and turn back the tide if necessary. He assured the gathered multitude that nothing would happen and there would be no disaster. He received a warm welcome from the crowd and a cheer when he said that Mr Nash was not welcome back in Adelaide.

As the clock ticked down to midday, somebody started a countdown and the thousands who had gathered all looked out to sea…..and nothing happened.

There was no tidal wave.

Gradually the crowds began to wander off, some to the nearest bar, others took advantage of the summer weather and stayed at the beach for the day and still others drifted off home.

Next morning ,The Advertiser in its editorial said: “Hopefully, the lesson we should all have learnt from yesterday’s pathetic anticlimax is to rely more on our common sense and less on the silly and unscientific speculation of self-appointed soothsayers.”

What are some of your memories of that day in Adelaide in 1976?

Childhood Memories of Growing Up In Adelaide
The 60s, The Decade That Rocked.

16 Responses to Adelaide’s Tidal Wave. The One That Never Happened