It was held on a dairy farm on a hot summer’s long weekend in January 1971. In the quiet, sleepy town of Myponga south of Adelaide, thousands of music fans turned out for a three day long rock music festival that they say changed the Australian music scene forever. 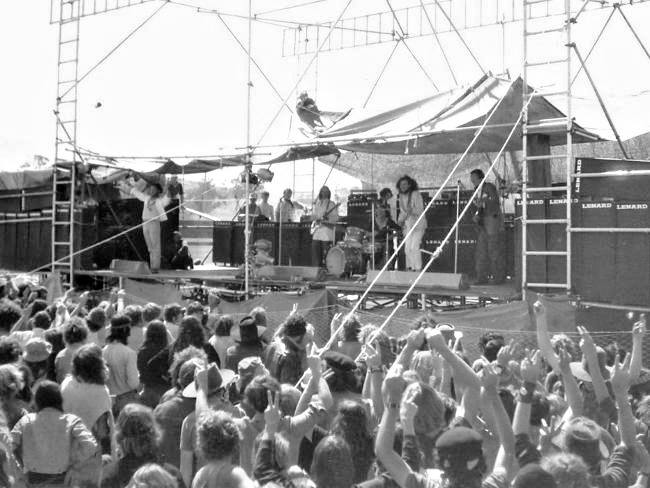 Photo from ARW Poster shows the stage with Daddy Cool performing and part of the 20,000 strong crowd

Inspired by the 1969 Woodstock concert in the United States, Myponga boasted some of the biggest rock music acts in the world at that time and gave birth to several more.

Crowd estimates vary, but it’s generally agreed that about 15,000 people paid the $6 entry fee. It’s also agreed that thousands more jumped the fences, swelling the numbers to well over 20,000.

The line-up included the newly formed Australian group Daddy Cool, Spectrum, Fraternity, whose lead singer at that time was Bon Scott (before he joined AC/DC), Chain and Billy Thorpe and the Aztecs. Cat Stevens pulled out at the last minute to perform in Los Angeles.

The concert was sponsored by 5AD, Adelaide’s top pop music station at the time and also received a great deal of coverage in the local media, with reports in the Sunday Mail  reflecting the bewildered attitude of the Adelaide establishment.

“Ten thousand heavy rock fans at the Myponga pop festival tonight settled themselves firmly in their garbage-strewn pop paddock for a night of love, peace, rock music and booze, booze and more booze,” one report read. “The fans, who have flocked here from all over Australia, have consumed a huge amount of liquor, and are ready for anything the bands can throw at them.”

It’s true there was plenty of booze, a fair bit of pot smoking and not many bras worn! “There are about 5000 girls at the festival and there does not seem to be a bra between them,” the journalist wrote. “The male pop lovers are dividing their time between the big sound on stage and the females.”

Ross Wilson who was lead singer for Daddy Cool says, “It left its mark on Australian rock history. I really think Myponga had a lot to do with giving us a springboard for what we became. And only having one Myponga concert preserves the legacy beautifully. It’s well regarded in the mists of time.”

Ross recalls how basic it was with very few amenities for either performers or fans, “It was out in the middle of a wheat field or something, and there was just dust and chaff everywhere. We were sleeping on straw that they’d brought in from somewhere, but we didn’t care.”

After the dust had begun to settle in Myponga, newspaper reports raised concerns about the amount of booze consumed, the drugs that were (apparently) freely available  and the shedding of morals along with the bras.

I was an announcer at the time with 5AD and so got to spend a couple of days there but decided to drive back to Adelaide each night. It was hot and dusty as I remember, the music was loud and there was a lot of very drunk people.

The Myponga festival was only ever held once and was apparently very lucky to break even for the promoters. There was a similar concert the following year at Meadows and also a number of shows on the east coast such as Sunbury.

But for three long days in the summer of `71 Myponga was at the centre of the rock ‘n’ roll universe.

Adelaide’s Great Race, The Grand Prix
Moores on the Square

19 Responses to Adelaide’s Own Woodstock, The Myponga Pop Festival