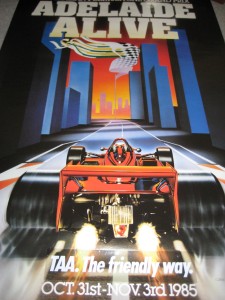 Photo from State Library SA. The poster that promoted the first Adelaide Grand Prix in 1985

There was a magical feeling in the air in Adelaide in late 1985 as the first Adelaide Grand Prix roared to life.

That early November day was the culmination of years of planning and hard work going back to the early 1980s when businessman Bill O’Gorman originally came up with the idea of hosting a Formula One race to try to do something to improve the image of the Adelaide. South Australia’s Premier John Bannon immediately got behind the idea and O’Gorman flew to London to do a deal with F1 boss Bernie Ecclestone.

The result of the meeting was a seven-year contract, starting in 1985, to stage the F1 in Australia and it was decided to build a street circuit incorporating Victoria Park with a long straight on Dequetteville Terrace.

It proved a winner immediately with the drivers proclaiming it as the best street circuit in Formula One racing. Unlike other street circuits, Adelaide was wide and fast in places, and included two straights, Jones Straight (named after Alan Jones, Australian F1 world champion) and a 900 metre long straight (named the “Brabham Straight” after three-time World Champion Sir Jack Brabham) where the faster cars reached over 200 mph (322 km/h).

The street circuit wasn’t the only winner for Adelaide. The teams soon discovered how friendly the city was, helped by the fact that the first race was an end-of-season event after the World Championship had been settled.

It established the tradition then of Adelaide being just one big party.

Adelaide came to a standstill during that first Grand Prix as everyone embraced the event (well, almost everyone). There were flags hanging from every lamp post in the city and posters promoting the event were everywhere. Fans got behind the merchandise as well, swapping their Cold Chisel T-Shirts for various team apparel as Grand Prix fever enveloped the city and even the Formula One paddock could not help but be swept up with the enthusiasm.

Corporate Adelaide embraced the opportunity to host and entertain clients and staff with an invitation to a private marquee or with complimentary passes.

People everywhere were quick to be the first to put on a GP party or barbecue and invite all their friends to celebrate the big event.

The highlight of the social event calendar was the Grand Prix Ball where drivers and crew mingled with fans at a $400-a-head event with national and international artists as entertainment. It was the ‘glam’ event of the year.

It all came to a screeching halt however in 1995, when Melbourne stole the event and the Grand Prix circus moved to Albert Park with the first race 1996.

Friends who have been tell me it’s not the same though and lacks the excitement and the sheer buzz that enveloped the whole city of Adelaide while the race was on.

Up On the Roof at Cox Foys
Adelaide’s Own Woodstock, The Myponga Pop Festival

One Response to Adelaide’s Great Race, The Grand Prix