Moore’s on the Square was a magnificent department store known to two generations of Adelaideans and founded by Charles Moore, a businessman who was born in Ireland in 1858.

Photo from the State Library of SA. Moore’s Department Store on the corner of Gouger Street and Victoria Square in the 1970s. The building is now used by the Law Courts.

According to Wikipedia “Moore’s opened in 1914, a new palatial store on the west side of Victoria Square between Grote and Grenfell Streets, designed by architects Garlick & Jackman. No expense was spared in providing a maximum of display area behind large plate glass windows, generously lit by a huge leadlight cupola and extensive artificial lighting. A feature was a grand marble staircase leading to the first floor. The store was officially opened two years later by the Mayor of Adelaide,  Isaac Isaacs, on 29th August 1916.”

Photo from the State Library of SA. In 1948 Moores was destoyed by one of the most spectacular fires ever seen in Adelaide

It traded successfully in Adelaide for the next three decades and then on the 2nd March 1948, Moore’s was gutted by fire; all that remained was some ground floor structures, the external shell, and the staircase. It was one of the most spectacular fires ever to be seen in Adelaide.

“The shop was rebuilt under the architects Garlick, Jackman and Gooden and business returned until a gradual decline in the 1970s. In 1979 the store was sold to the South Australian Government and was later transformed into a major law courts building containing some 26 courtrooms, library and administration. It was christened the “Sir Samuel Way Building” by the Governor of South Australia Sir Donald Dunstan in 1983 commemorating the South Australian jurist Samuel Way.”

From a post originally on the ARW Facebook website last year, Barb Walker recalled that Moores had the most magnificent interior. “I think the grand staircase was marble. And I remember the shoe department (of course). It was like a stage! Loved that old store, those were the days”. John Siebert wrote “My Mother used to work there as a cosmetics buyer and was pregnant with me at the time. She always said the fire on the night of 2nd March brought on my birth on 4th March”. 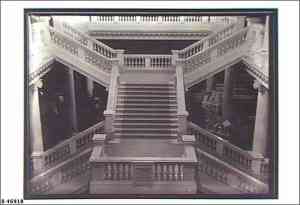 Photo from the State Library of SA. The magnificent marble staircase

Col Penney related how “In 1942 I lived at Croydon and in 1949, I shifted to Brooklyn Park.. Whilst at Croydon, my elder brother, parents and myself, caught the train to town, and walked to ‘Victoria Square’ to see the big fire at Moore’s”.        Jackie Parkhouse too had vivid memories of the store; “I remember that staircase., coming down it in the early 70’s I saw the most beautiful Indian looking dress. I thought about for years”.

Other posters had fond recollections of Christmas at Moores and how it had been designed along the lines of some of the most glamorous department stores in Paris and continental Europe.

Thankfully we still have the building and there are occasionally open days when the public are invited in to view the interior which even today is still beautiful. Next time it opens don’t miss the chance to see it!

Charles Moores, Moores on the Square

Adelaide’s Own Woodstock, The Myponga Pop Festival
Glenelg. The Beach From Our Youth

24 Responses to Moores on the Square