In the mid 50s Cox Foys opened a new department store in Rundle Street with a rooftop funfair for the kids. There was a giant Ferris wheel, train rides, a merry-go-round and other rides that mum would take us to as a treat after shopping in the city. Unfortunately very few photos remain of the once popular rooftop playground but I’ve managed to find a few to share with you in this post. 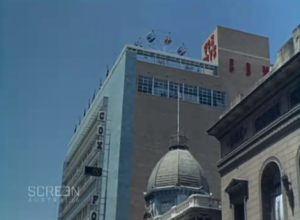 Photo from Screen Australia 1954 film promoting Adelaide to the rest of the world. This is the how the Ferris wheel looked from the street

On our Facebook page we’ve had many nostalgic comments about the rooftop fun fair, most posters recalling it was something that generally occurred on a shopping trip to town and was seen as a very special treat.

Michael Noble posted “I am old enough to remember Cox Foy’s fun park — mum would take us there, then we would go to the John Martin’s restaurant, another department store that no longer exists”. Necia Nicholas wrote “Thankyou for this memory. It has bought back wonderful memories of trips into town with mum and brothers during school holidays when I was aged 5-9 (1964 – 1968). My favourite ride was the Flying Pigs. I would spend hours on it under the watchful eyes of my brother”.

Julie McShanag also remembered it. “I used to harass my mother terribly until I got there then didn’t want to leave!! We used to have lunch at Coles. There was a huge cafeteria upstairs. Pie with chips and gravy and jelly with fresh cream, yummmmmm” while Tracey Findlay recalled “My Nana would always take me to town in the school holidays. We would dress up, she would take me to Cox Foys for a play and then to John Martins for lunch meat pie chips and gravy. Going to the city was a treat”.

Many posters had vivid recollections about the Ferris wheel; Corian Verhoeven Kolega relatrd how she will “never forget that Ferris Wheel on the top of Cox Foys! I was about 13 years old 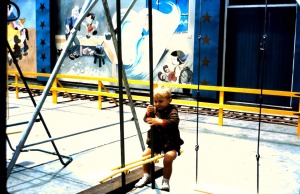 and took my niece Tania who was 7 at the time on the Ferris Wheel. It was a Friday night and all of a sudden a storm rolled in cutting off the power. We were stuck on that thing for over half an hour swinging on the top in the rain and wind. I have been frightened of heights and Ferris wheels ever since”! Panda James commented “It was a huge treat for my sister and I on a trip into town. If we were patient with the boring shopping mum had to do and didn’t whinge, then we would head to Cox Foys for lunch or afternoon tea then head to the roof for THAT ride on the Ferris Wheel..not a huge wheel but it already towered over anything else in the city…I loved the ride with the little boats that went around in a circle of very dirty water. Lol..Mum always said don’t put your hands in the water! If we were really good we were treated to a Fairy Floss too”.

Sadly, nothing but memories remain of the Cox Foys rooftop funfair and there are very few photos. I found a still shot from a You Tube video of Adelaide made in 1954. ARW Facebook poster Darren Wirth shared a couple from the family album and there’s also a photo from the Advertiser archives, but that’s about it.

Cox Foys  was eventually sold to Harris Scarfe and closed in 1977.

22 Responses to Up On the Roof at Cox Foys