It’s hard to imagine now, but there was a time when the River Torrens was a great place for a cool swim, for fishing and lots of fun. Keith Hasler of Modbury North wrote to me recently with boyhood memories of when he lived at Gilberton as a young lad from 1950 to 1970. Here’s part of that letter;

“Just below the Hackney bridge there used to be a clay cliff where the water ran really fast undercutting the bank, and all you had to do was drop a line with a yabby on it and a cork float and as soon as it passed that bank you would hook up to a redfin – delicious tasting white flesh.

The River Torren’s water was clear then and ran all the time, even with all the backyard rubbish dumps along the river.

In order to get bait we would dragnet, using a hessian bag split down the side, and using two people push it into the reeds and edges to catch yabbies, shrimps, congollis and small carp with the occasional turtle, wolf spiders and scorpion bugs.

Bows and arrows were used a lot – using the river reeds as arrows and the bow was from a good bendable sapling. But the shanghai was the most used of all and ammo was mostly stones and olives.

The air rifle (if you could afford one) was great and you could walk down to the river and the parklands and use it without issue.

Most of the Torrens was a dump, used by private and councils alike and so to get money, we scrounged among the building rubble, etc, and sourced lead, copper, brass, aluminium and cast iron to sell for scrap.

You used the old homemade go-kart to drag it home, which included the 44 gallon drums used to burn rubbish in at home.

The Gilberton swimming pool was where we all learnt to swim on those cold Sunday mornings and as we got older and gamer you would jump off the Gilby swing bridge or the adjacent cliff. 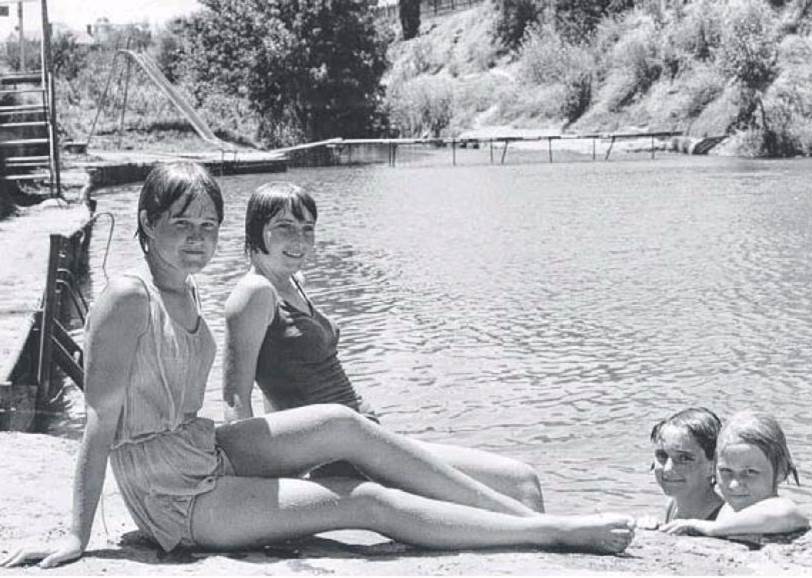 Other interesting places were the junction of the St Peters channel and also where the backyards of the homes (now gone) between the Hackney bridge and the new St Peters channel, used to have some “caves” which were used to access the windmills up top on the properties. These caves were cut into the cliff base. 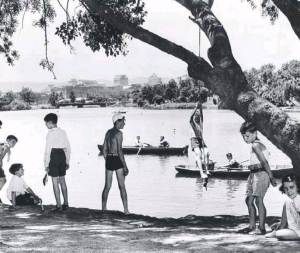 Children swimming on the banks of the Torrens in 1951

There were many drownings over the years. The old fisherman who wore the old time suits and drowned there as well as the one who landed on the “turney boards” and was killed. The parklands were divided into cow park, park with horses, hill park, and park with no horses (which had the olives). Olive flicking was a good thing to do as long as you didn’t get hit. You used the long slender shoots at the base of the tree and strip it of all matter and sharpened the tip. Put a good juicy purple olive on top and carefully flick it at your intended target.

The same parks is where we used to pick mushrooms and fry them in fat on top of the stove with salt and pepper”. Thanks Keith for sharing some of those memories of long gone days.

By the late 70s, swimming in the river had become a health risk, although I’m not sure exactly when the authorities banned it completely. It’s sad to think now that the Torrens has become little more that a sewer and there seems little inclination by any level of government to clean it up.

Remember the Migrant Hostels of Adelaide?
Memories of the Regent Theatre in Rundle Street

5 Responses to When We Swam in the Torrens

Leave a Reply to Helen Click here to cancel reply.