When Norm Bridge shared this photo of the Adelaide Railway Station of old on our Facebook page earlier this year it brought back a flood of memories for many of the site’s followers. 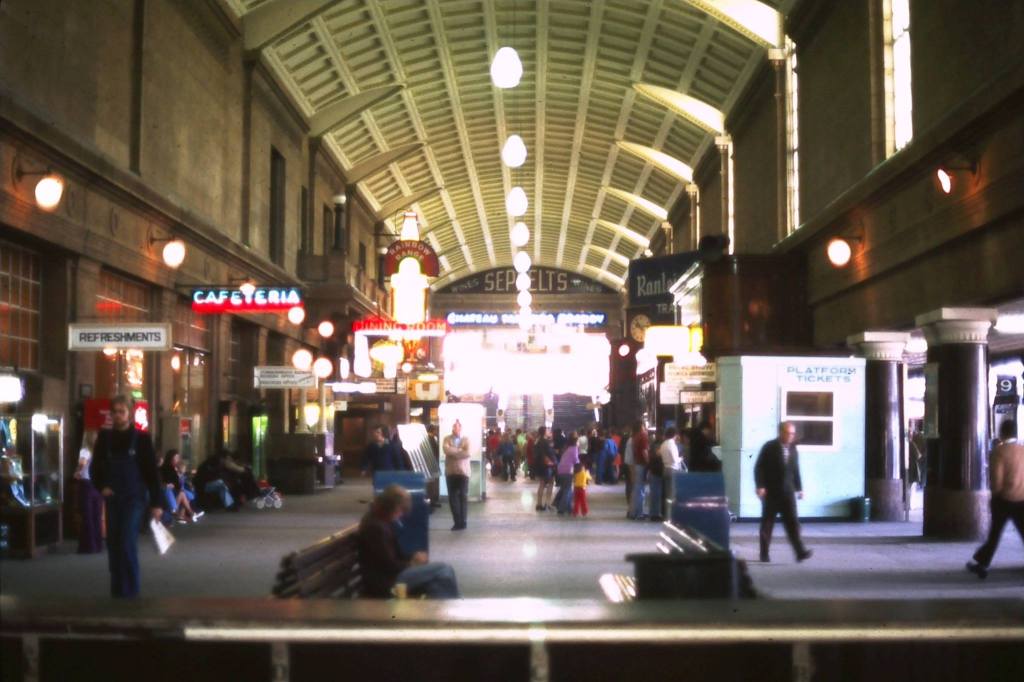 Photo from Norm Bridge. The interior of the old Railway Station. It was always such a thriving hive of activity with people dashing to catch a train or people arriving and scurrying up the stairs into the city

I loved the old Railway Station! It was always such a thriving hive of activity with people dashing to catch a train or people arriving and scurrying up the stairs into the city. I used to love the old cafeteria which is in this shot, with its smorgasboard style meals, how many pies with tomato sauce did I eat there with a knife and fork!!

And I think the man in blue may have gone by the time this photo was taken. I also remember the shops on the ramp too and I’m sure there was a big jockey’s scales just at the start of the ramp, 1d to check your weight.

I remember too the big red dragon sign which I recall was at the northern end and it used to give a loud click when it switched on and it had that fleuro buzz.

Lots of people posted their own comments and memories. Peter Lang wrote; “This magnificent building was erected in 1926 and was designed by Herbert Louis Jackman who was also responsible for many other of Adelaide’s prominent buildings. For Example: Tattersall’s Hotel, Hindley Street (1900), the rebuilding of the Stag Hotel, Rundle Street (1902), Bowman’s Building, King William Street (1908), Charles Moore’s Department Store, Victoria Square (1913), and Hooper’s Furnishing Arcade, Hindley Street (1927-1930). All this by a country lad born in Kapunda

Scott Arbon posted how he recalled the pasties from the bakery were very peppery and tasted brilliant. Other memories for him included; “Watching the lights flashing around the departure/arrival board and trying to work out how it worked. The Dragon down one end. The little buggy pulling along the small wagons with people’s bags on them. Probably most of all, I remember it actually being a railway station with people arriving and departing for many destinations around the state, not like it is now, just a suburban train destination”.

Alice Dowling remembered Shipway the jeweller at the bottom of the ramp; “I had my ears pierced back in 1960. I used to go to the cafeteria for lunch, those were the best days of my childhood coming home on the train was a treat in those days”.

John Burford posted; “If I could pick just one memory of the Railway Station, it would be the big iron gates to the platforms. Then the cafeteria, the ramp, the Seppelts and dragon signs. Wish I’d bothered to photograph it all then, but like so many things when you’re young and have to pay for each roll of film,  I didn’t.

And just finally, from Andrew Heslop; “I love this image, I remember the neon Lion sign across the ramp (below the windows) heading towards the platforms.  There were also railway posters on the left advertising Arkaroola and other places that could be reached by train. This photo above I believe is from September, as the white booth is selling Royal Show tickets”.

The old Railway Station photo certainly brought back many memories for countless people!

What are some of the memories you have of the Adelaide Railway Station from back then.

20 Responses to Treasured Memories of the Old Railway Station