Remember when you would pull up at the local petrol station and an attendant would rush out to fill the tank, check your oil and tyre pressure and wash the windscreen? Then he or she would take the cash inside and bring back the change. Back then you did not even have to step out of the car.

Listening to ABC radio recently, I heard people reminiscing about those earlier days when driveway service was considered par for the course, whereas these days it’s become little more than a faded memory. 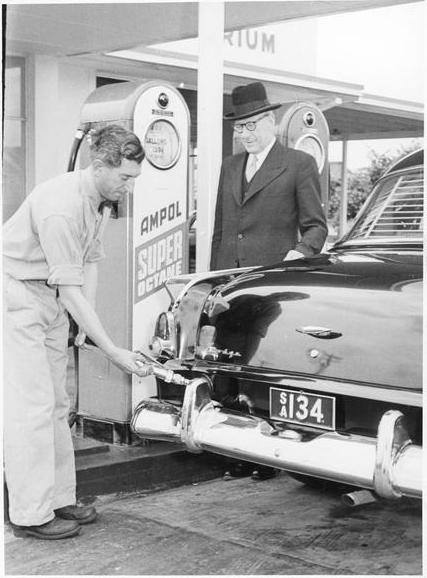 “Mount Gambier historian Laurie Fox was a driveway attendant in his later teenage years during the 1940s war years at Walkers Garage (in Mt Gambier) and remembers dashing out in all forms of weather to service customers.

“All the garages had all four or five different pumps back then, when a person would pull up they would choose the petrol brand they wanted,” he said.

In those days petrol was rationed but people would pull up and ask for 2 or 4 gallons from the young man. 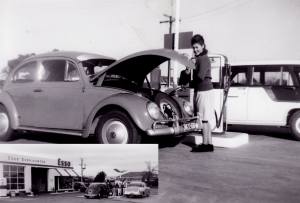 Mel Barton-Ancliffe shared this photo; “As a 13 year old, I worked after school on Fridays and Saturday mornings at the Atlantic, then Esso Service Station on Marion Road South Plympton. The servo was owned by Mrs M. Bush, who I was very fond of. Her daughter Ilze is pictured

“It was one shilling and ten pence a gallon back then,” Laurie said.

In today’s currency, that equates to 4.5 cents a litre.

In later years, when Laurie was running his motorbike business, he remembered the very first single branded Shell service station opening near the Odeon Theatre.

Nowadays, like most in the western world, Laurie pumps his own petrol, with most driveway attendants disappearing around the 1980s and early 1990s as stations cut costs to compete with miniscule price differences.

“There’s not a great deal of it anymore.

“Some people kept driveway service going a lot longer than others.”

New Jersey and Oregon banned self-service in early 1950 after heavy lobbying by service station owners saying safety and jobs as reasons to keep attendants on deck.

But Mount Gambier historian Colin Thompson fondly remembers the days when you could pull up and enjoy the ‘full service’.

“They’d say, ‘can I check your oil and would you like a dash of Redex lubricant,” for which they would receive sixpence in commission,” he said.”

According to the programme the electric power petrol pumps were first introduced in the early 60s which then led to self service petrol stations and eventually the end of driveway service.

Mind you I don’t recall that there was a big fuss about the end of driveway service back then but I guess it happened over a period of time and maybe we just didn’t notice it slip away.

Adelaide City Baths 1861-1969
Recollections of Semaphore and the Train