When Andrew Heslop: Social Entrepreneur, Commentator & Community Advocate shared a photo and some recollections of growing up in Semaphore in the 70s on the ARW Facebook website late last year, it brought back some wonderful memories for many people. Andrew wrote; “My grandparents lived at Semaphore and I mostly grew up with them, listening to 5DN 972 on the kitchen wireless. At 15 my first job was at 5DN working on Saturday afternoon. Here’s a shot of Semaphore Road with a double track railway. SAR country trains would bring people direct to Semaphore for holidays at the hotels, holiday lets and boarding houses which once defined the suburb. The railway line closed in 1978”. 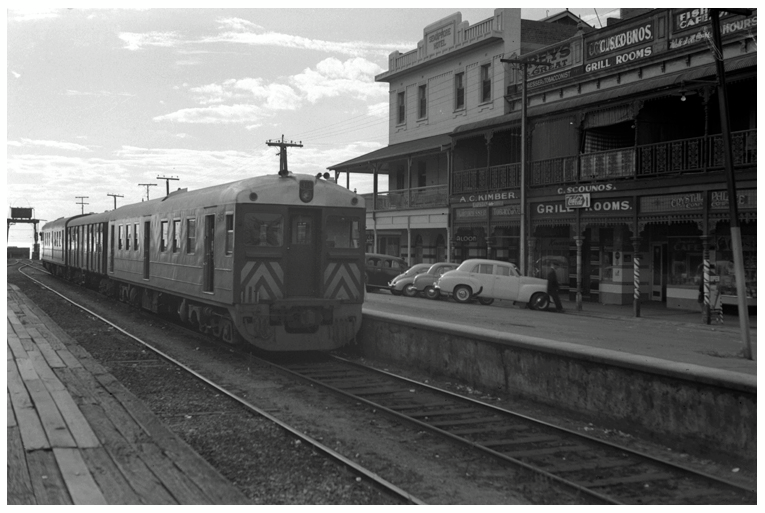 The line was originally opened in 1882 and branched off at Glanville Station and ran along the centre of Semaphore Road, until it terminated right next to the Esplanade. Semaphore station was located east of Esplanade Road. The Exeter station was located to the east side of where Swan Terrace and Woolnough Road intersect. The original stations have been demolished and practically no evidence of the stations remains. The original rail track was also dismantled,

One of those who commented was Channel 7 newsreader and TV personality Graeme Goodings who wrote; “It never ceases to amaze me that pictures of Adelaide in the 20’s, through to the early 70’s show a city that appears far more progressive and exciting that it does today.

Others had fond memories of both the train and Semaphore itself. Noeline Overall too grew up in Largs and Semaphore and caught the train from Glanville to Semaphore beach and the shops; “It was an icon on Semaphore Road, sadly missed! And, yes the conductor with the hand bell!! Many Adelaide things like this are removed for the worse. We have gone backwards at times as a city”.

Christine Rundle also remembers the “great fun we had in Semaphore and spending lots of summers at my grandparent’s home in Newman Street. I often drive down that street now, past their old 2 storey home and often think I’d love to be able to see inside the old place again, sure there’d be a few changes but I’m also hopeful the old walls might remember me”.

Of course we recently featured a story on the Red Hen trains here on the ARW website and Edward Burgess commented on how he made lots of trips to Semaphore on the Red Hen train. “It was a massive mistake to remove this wonderful service. I was down there the day it closed, protesting, but to no avail. The conductor with the handbell on the old brill trains was an unusual sight”.

Lisa Adelaide explained how each year her family came down to Semaphore from the Adelaide Hills for summer holidays. “We stayed in a flat attached to an old house in Hart Street. I loved walking to the fun fair. I also remember concerts at night in the sound shell. They are such happy memories.”

Just finally, Patsy Kelly Quinn summed up the feelings many people have for the beach side suburb when she commented; “Semaphore, the place where everyone knows each other and you will always catch up for a chat with a friendly local. We have been here since 1962 and wouldn’t want to live anywhere else on earth. My sister and I caught that train every day for years into the city for work.”

Service Station Attendants, A Bygone Era
Remember When We Built Our Own Billycarts

13 Responses to Recollections of Semaphore and the Train