By Bob Byrne on November 9, 2014 in Childhood Memories

Remember the first fridge your family ever bought?

Prior to refrigerators we had ice chests. The ice man would come every second day and deliver a big block of ice which he would carry with ice tongs (were they called pliers?) and deliver it into the top of the chest. 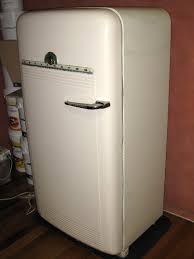 Photo from Aussie Home Brewer. Lots of old original fridges have survived as the beer fridge

Fridges arrived in the 50s and although I can’t remember what brand our first fridge was, I do remember it had a small freezer compartment big enough for an Amscol brick of ice cream and which needed defrosting regularly.

I came across an article just recently in the London Daily Mail about one family that has kept the very first fridge they ever had.

“When Geraldine Rowarth bought her first refrigerator, it was the mod con at the top of every housewife’s wish list.

The year was 1957 and Mrs Rowarth paid 65 guineas for the appliance.

That sum – the equivalent to £1,100 in today’s money – was a month’s wages for her husband Ian, a teacher. But it was money well spent. For half a century later, her British-made Prestcold cooler is still going strong, now sitting in her daughter’s farmhouse kitchen.

Sally Garrod was born a few weeks after her mother bought the fridge, which has outlasted two more modern models and countless other household appliances.

Mrs Rowarth, now 74, was a mother of one, heavily pregnant, living in a council house when she bought the fridge.  Fifty years have done nothing to dull her memories of just how exciting it was to have a refrigerator when the appliances were only just taking off in the UK.

“Not a lot of people had a fridge in those days,” said Mrs Rowarth, a retired nurse.

“They were very popular in America and I really wanted to have one.

“We didn’t have much money, I was expecting my second child and all we had was a food safe in the pantry which was little more than a box with mesh on the front to keep the flies out. 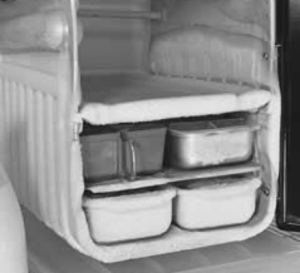 “It didn’t keep food fresh very long so I was shopping for bits and pieces almost every day. Milk wouldn’t last much more than a day.”

She and her husband travelled from their home in Blofield to nearby Norwich to buy the Prestcold, chosen in part because of its fashionable colour scheme.

Rapidly installed, and shown to admiring family and neighbours, it made “an enormous difference”.

“I remember thinking I don’t have to dash to the shops every day,” said Mrs Rowarth. “It was such a new concept to keep things so cool. Neither of our parents had fridges.”

She used the fridge to store milk, cheese, meat and bacon.

Her daughter added: “The expression ‘they don’t make them like they used to’ can be applied to my fridge. I don’t know what I would do without it now. It’s part of family history.”

Did You Ever Catch an Adelaide Trolleybus?
Adelaide’s Lost Picture Theatres; Part One

2 Responses to Remember ‘Defrosting’ the Fridge?