How many old picture theatres can you remember from the ‘golden era’ of when going to the pictures was a special event.

I’ve already touched on the wonderful Regent Theatre in Rundle Street, now the Regent Arcade. But can you also remember the Rex or the Savoy, how about the Metro or the Majestic. Here are some of those wonderful old theatres you might recall. 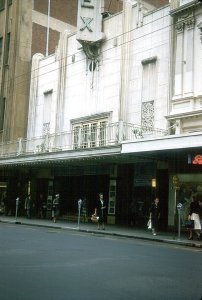 Here’s a photo of the Rex Picture Theatre in Rundle St which closed and was demolished in 1961 to make way for extensions to the Cox-Foys Building.

The Rex apparently replaced an earlier picture theatre called ‘The Pav’ or the Pavillion which was the first theatre in South Australia to show pictures continuously, from 11am until 11pm. This is going back a bit but does anyone have any memories of the Rex?

The Savoy, also in Rundle St, showed the latest newsreels from Cinesound Review or Movietone News. 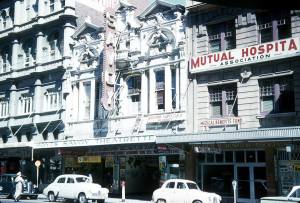 Photo by Frank Hall. Hoyts Savoy Theatrette. I have fond memories of going there and watching the newsreels to fill in time. Note how beautiful and ornate the building was.

I think from memory it was 1/- for a child’s ticket (not sure about adults) and the sessions would run for about an hour.

Newsreel Theatrettes originally started during the war years when people were anxious to find out the latest developments from the front, and lasted until the early 60s by which time TV had come along and taken away their audience.

You would get the latest newsreels (just a few weeks old), and generally a comedy short like a ‘Steve Smith Special’, and possibly a cartoon. 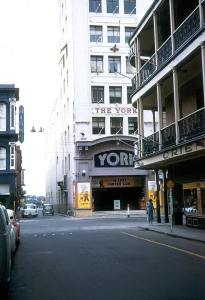 Photo by Frank Hall. The York in Rundle Street was demolished when Gawler Place was widened on the 60s

The York was located on the corner of Rundle St and Gawler Place. It was a tall building with a very narrow entrance (when you consider its seating capacity).

It was originally built by the Greater Wondergraph Theatres chain and opened in 1921.

The side walls of the auditorium had painted landscapes, representing Australasian scenery, the work of decorator George Coulter.

The York Theatre was taken over by the Greater Union Theatres chain in January 1929.

It was modernised in May 1938 when it became a first run release house for MGM films. It was finally demolished in the 1960s for the widening of Gawler Place.

Here’s a photo of the side lane off Rundle Street in 1961 showing the Plaza Theatre.

The Plaza was erected out of the old Embassy Ballroom. It opened in 1955 and was off Rundle St, down the lane from the Regent Theatre. 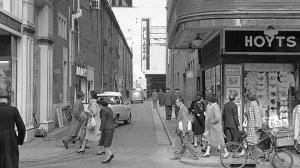 In February 1966, the Plaza was renamed the Paris Theatre and opened with its new signage and the blockbuster, The Sound of Music, which ran for two years.

Shortly after, it was demolished to make way for the Regent 2. I have vivid recollections of this lane being decorated with hundreds of miniature hot air balloons for the David Niven film, Around the World in Eighty Days.