The much loved event is now sponsored by the South Australian Credit Unions but the original ‘Johnnies’ pageant had it’s beginnings in 1931 when Sir Edward Hayward visited the United States and Canada and came up with the idea of a Christmas parade through the streets of Adelaide featuring nursery rhyme characters, marching bands and clowns. The city was still recovering from the effects of the ‘Great Depression’ and Sir Edward wanted to create an event to help people smile again. 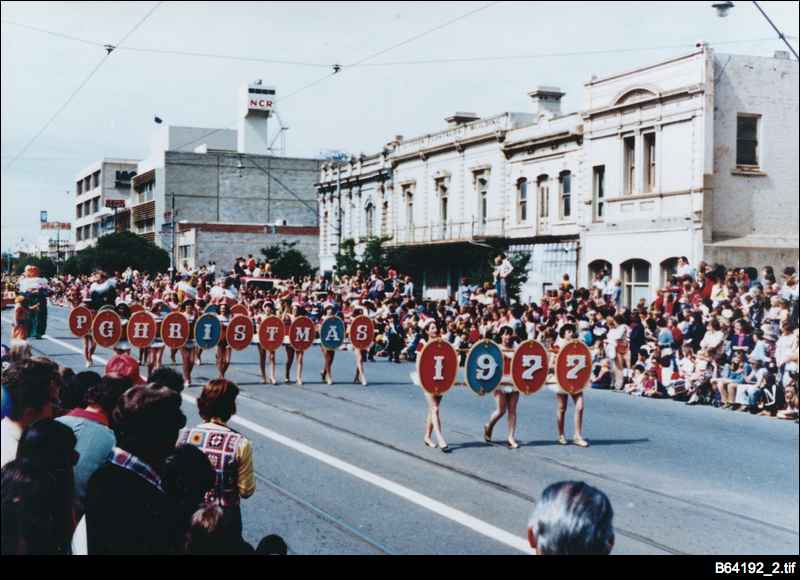 That first parade commenced in 1933. There were only about 12 floats, four bands and 200,000 spectators who turned out to witness something they’d never seen in their city before. It lasted approximately 40 minutes and all participants were staff from John Martin’s, Adelaide’s largest family retail store at that time. The first pageant ran from Angas Street to the store in Rundle Street and the early costumes were all made of crepe paper, but Father Christmas was still the most important of them all. The pageant did not begin its new route from South Terrace until 1953.

Over the years there have always been the crowd favourites. Nipper and Nimble have been in every pageant since the beginning and it was such an honour to be chosen to ride either one!

Nellie the elephant broke down almost every year in those days! They’ve obviously given her a new motor as she seems to get through each year now!

While the Pageant as an annual event lives on, there have been some welcome changes over the years. This photo is from the 1937 pageant and is a perfect example of how social mores, thankfully, have changed. The float, based on a nursery rhyme, featured ten people dressed with blackened faces, sitting on a log. It remained a regular feature of the pageant until the late 1960s when, as a reflection of our changing values, it was retired.

Ken Taylor sent in this photo of the Christmas Pageant which was taken by his father in 1957 and which shows the Adelaide Drum and Fife Band, of which Ken was a member at the time, marching past the old 5AD building on the corner of King William and Waymouth streets. That building was replaced shortly after this was taken, by The Advertiser building which has since been replaced by the ANZ Bank building. There’s the old Criterion Hotel in the background too, now also demolished. 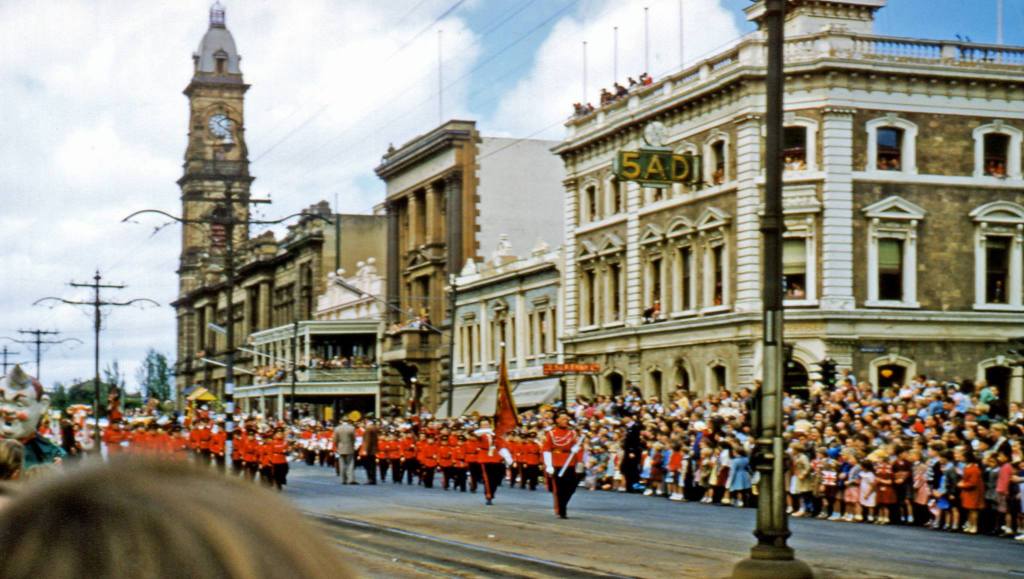 Father Christmas’ arrival was not as grand back then as it is today, but he was still the most important float of all as far as the boys and girls were concerned. 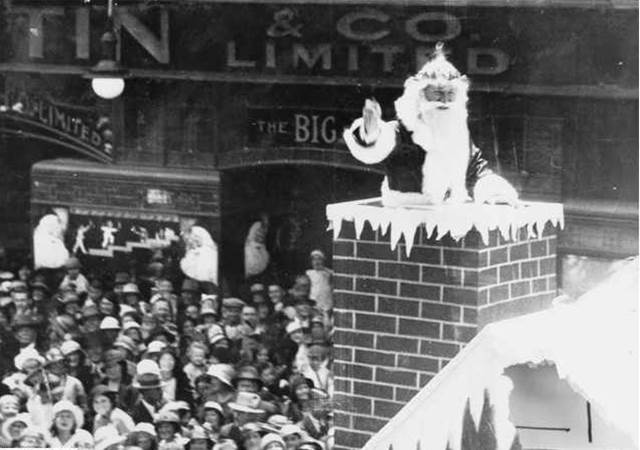 Photo from the Sate Library. The first Father Christmas in 1933

And remember when Father Christmas took up residence in the Johnnies Magic Cave right in the middle of the toy department? When you could actually see Santa while you waited in line for your moment to sit on his knee? When they gave away a free Christmas stocking with a comic, pencils and other little surprises? When you were allowed to take your own photos? When all the department stores filled their windows with nativity scenes and the season wasn’t all about making money? When Nipper and Nimble, and the jolly old fellow in the red suit, were where they ought to be and everything in the universe was in its right place? It might not have been as flash as it is today but, oh, what a memory!!
And then you could go shopping in Johnnies for all your Christmas presents.

The Best Time to be a Teenager
Did You Ever Catch an Adelaide Trolleybus?