We drove or walked passed them regularly when we were younger, the buildings that were part and parcel of our everyday life in Adelaide until the 60s and 70s.

Then they were suddenly gone, demolished to make way for a new structure or development.

One enterprising photographer decided to capture some of the old buildings on film before they disappeared. Frank Hall visited sites where demolition was about to take place, photographed the buildings and is now sharing some of the images from his collection.

My thanks to Elaine Hall, Frank’s wife, for posting these wonderful photos on Adelaide Remember When. 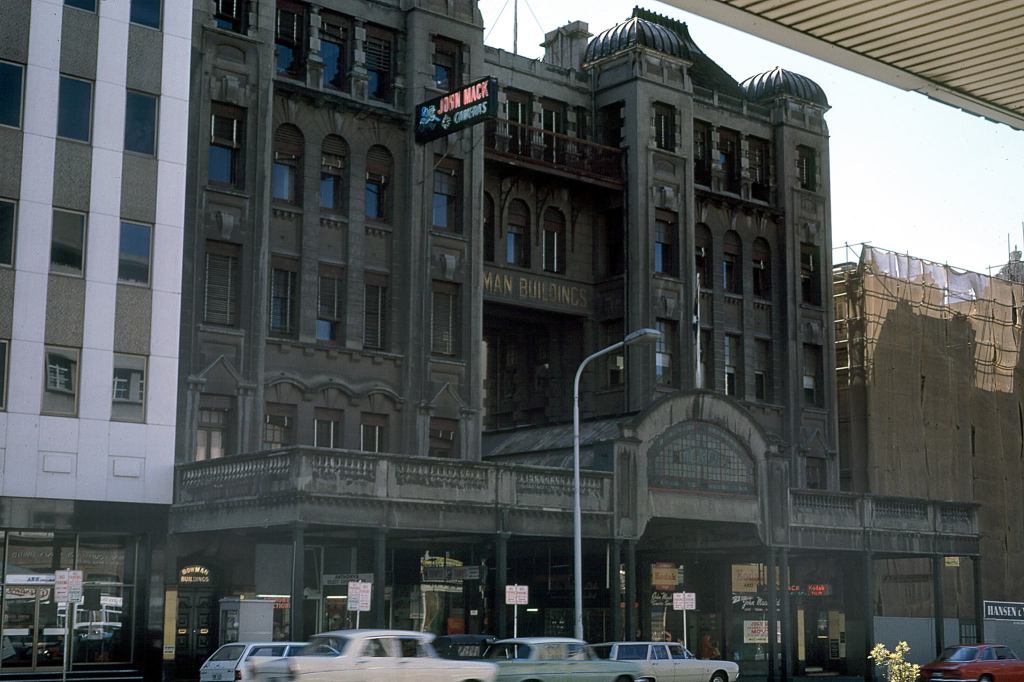 The Bowman Buildings and Arcade in King William Street, just near Currie Street. Demolished in the 1970s

The Bowman Building on King William Street near Currie Street, had numerous shops and offices and a fine arcade which included a gent’s hairdresser, tobacconist,  Malboro Aviaries for all bird and fish needs, Corset House, experts in fitting correct support for women, S D Kerr Umbrella Dealers and the Musical Box, which I recall was a record shop owned by Kym Bonython.

The building was erected by Keith Bowman in the early 20th century, was five-storeys and described as “an early example of reinforced concrete in multi-storey architecture”. I’m not sure when it was demolished, possibly in the early 70s. 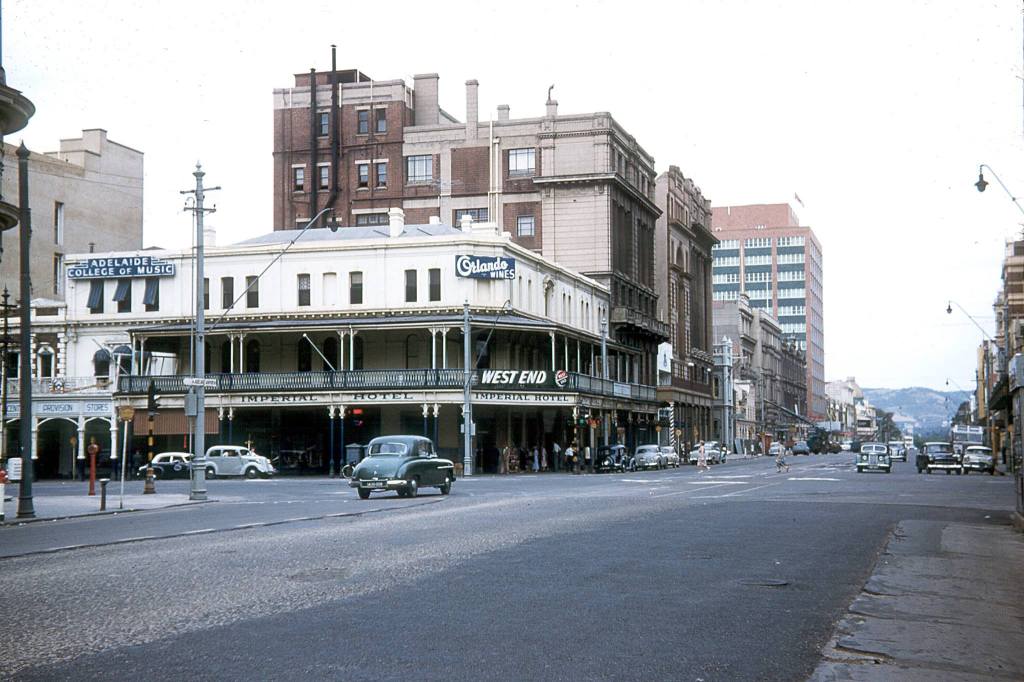 The Imperial Hotel on the corner of Grenfell St and King William St. The building alongside housed the Central Provision Stores and the Adelaide College of Music. The Imperial Hotel was built in 1866 for Asher Hamm. According to the Adelaide Heritage City Website it was; “A three-storied stuccoed building, it had two shops on the King William Street frontage as well as the usual hotel facilities. The Union Club occupied most of the first floor of the hotel and the third floor had a billiard room and bedrooms. It was demolished in 1960 for the National Mutual Building, built in 1961” 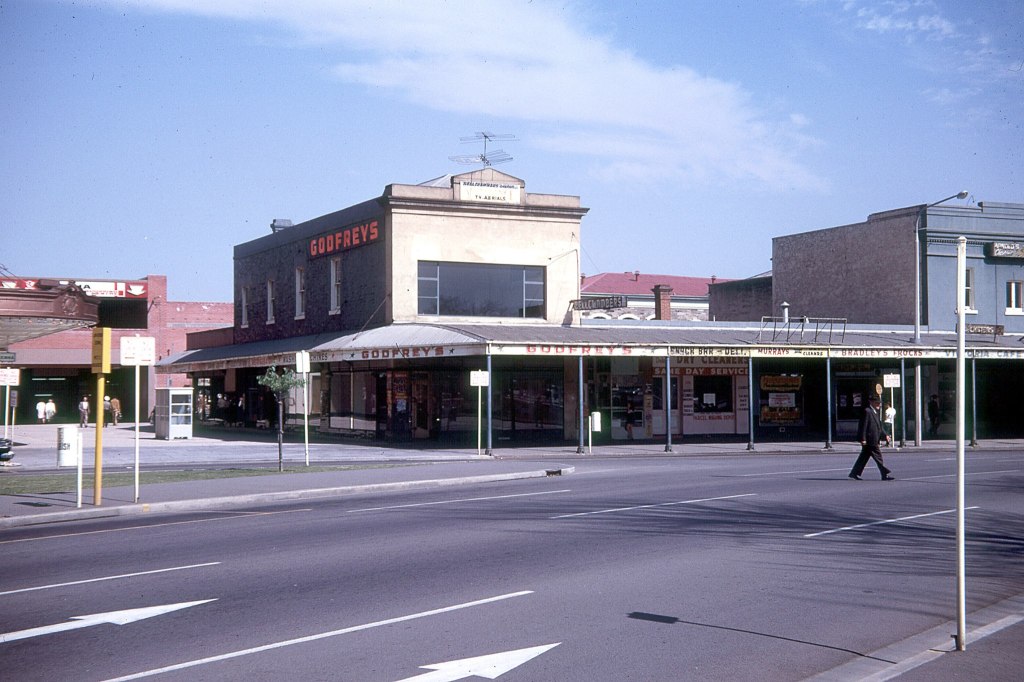 Before the Hilton Hotel was built. Some of the small shops that were on the site where the Hilton now stands in Victoria Square.

Pre-Hilton Hotel days in Victoria Square. This photo shows the buildings that stood where the Hilton Hotel is now situated, with Godfreys, a snack bar and deli, Murrays Dry Cleaners, Bradley Frocks and Victoria Cafe. To the left of the photo would be Moore’s on the Square and where the phone boxes are in this photo is now the walkway into the little Central Market Arcade and the escalators up to the Central Market Carpark. And Godfreys would be the southern side of the Hilton. 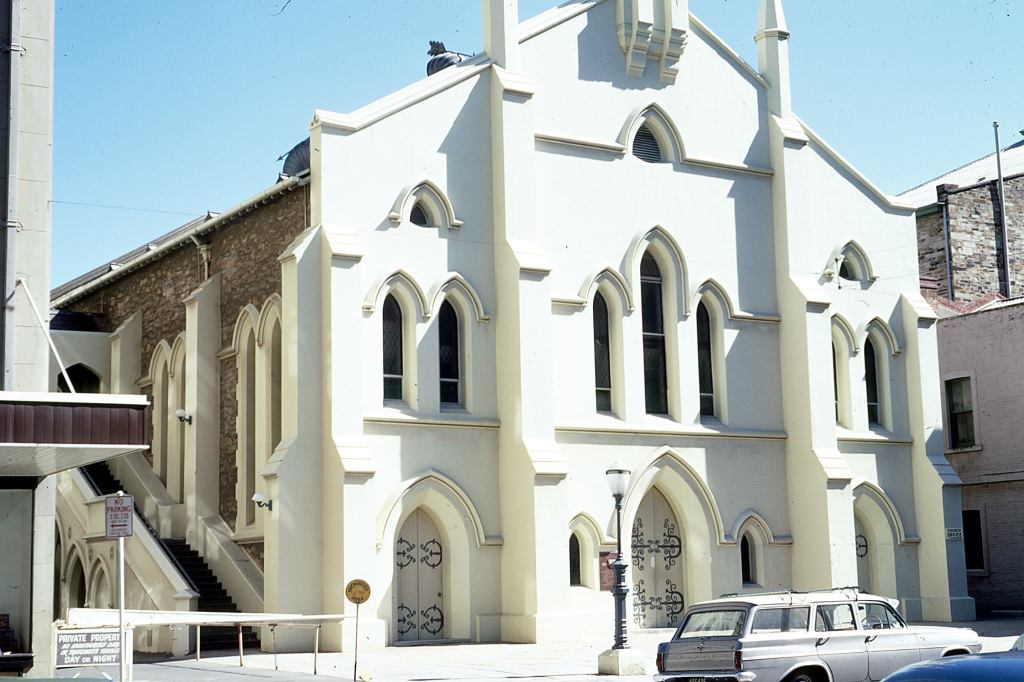 The Pirie Street Methodist Church, located behind the Adelaide Town Hall, was the ‘cathedral church’ of Methodism in Adelaide. It was built in 1850, it could seat 800 downstairs, and an additional 400 in the galleries. In 1969 Pirie Street Methodist congregation merged with nearby Stow Congregational Church, an early step in what was to become the Uniting Church.

In 1972 the church was closed and demolished to make way for the Colonel Light Centre.

What are your memories of these buildings which stood for many years in Adelaide city?

A Chookhouse, the Dunny and a Hills Hoist.
Radio Days, When Wireless Was King.