By Bob Byrne on November 27, 2014 in People and Personalities

“How do you do, ladies and gentlemen, and boys and girls. I am Julius Sumner Miller, and physics is my business”. 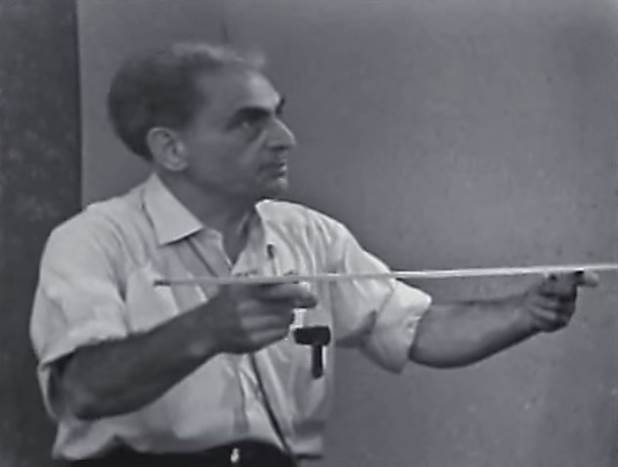 Photo from ABC TV. Why Is It So? known for its “cool experiments, interesting science, and the professor’s fantastic hair”

Remember the TV show “Why Is It So?” which was broadcast from 1963 to about the mid 80’s? It became an instant hit known for its “cool experiments, interesting science, and the professor’s fantastic hair”. The tremendous on-air popularity of the programme was due to the absolute enthusiasm not normally associated with serious science. Shows would be liberally sprinkled with phrases such as “He who is not stirred by the beauty of it is already dead”, and he also liked to trick the audience. A common ploy would be to hold up an empty glass and ask guests to confirm it was empty….then chide them for not noticing it was full of air.

There are many stories about the show. For example, Professor Miller’s first television appearance in Australia was on The Bob Sanders Show in 1963. In an improvised physics demonstration, he went to great lengths to explain that he would drive a drinking straw through a raw potato. Obviously a paper straw normally does not have sufficient strength, but if one pinches the end, the trapped air acts as a piston, easily piercing the potato. For the first time in his career though he could not get it to work, and he loudly exclaimed “Australian straws ain’t worth a damn!”. The next morning, when the professor arrived at his Sydney University laboratory he found one million drinking straws on the floor with a telegram reading “You might find one of these fitting your requirements”. He later stated “I sat amongst the straws, with straws stuck in my hair and ears. But clearly I had made a mistake. I should have said: ‘Australian potatoes ain’t worth a damn’, and I’d have cornered the potato market!” 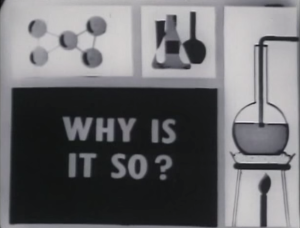 Photo from ABC TV. Professor Miller was asked to host his own science based TV show on the ABC

Shortly after, he was offered the job presenting a regular science programme for ABC TV. When asked how much money he wanted to do the show, he replied that, he never asked, he listened to an offer then “multiplied it by a factor between two and ten”.

Due to budget constraints the offer was withdrawn, but an agreement was eventually reached for Miller to host his own science based TV series which was filmed at the University of Sydney where he taught.

The show became so popular that in 1966 questions from his programme with an answer to the previous day’s question, were published as “Millergrams” for ‘The Australian’ newspaper and were eventually published in 3 books. He also became known as the face for Cadbury’s Chocolate in the 80’s, describing how each block of chocolate “embraces substantial nourishment and enjoyment,” and contained “a glass and a half of full-cream dairy milk.”

Professor Julius Sumner Miller became seriously ill in early 1987 and returned to the United States where he was diagnosed with leukemia. He died just six weeks later on April 14, 1987 and had willed his body to the University of Southern California’s School of Dentistry. There were no services held, at his own request.

Professor Julius Sumner Miller, Why Is It So