By Bob Byrne on October 6, 2014 in Childhood Memories

Keith Manson posted a question recently on the ARW Facebook page regarding a well known old landmark of Adelaide; “This is about as vague as they come but, in the early ’80s, I can recall a statue of King Neptune (I think it was) somewhere on South Road, somewhere south of Clovelly Park. It wasn’t lifelike but more cartoonish in appearance. Can anyone shed any light please”?

Many Adelaideans who spent their mis-spent teenage years in the 60s and 70s will recall the shortage of petrol on the weekends. Back then service stations would close at around midday on Saturday and if you missed filling up it was a long wait until Monday morning. There were a few places where fuel was available, the airport, Cavan, Eagle on the Hill and at Darlington. 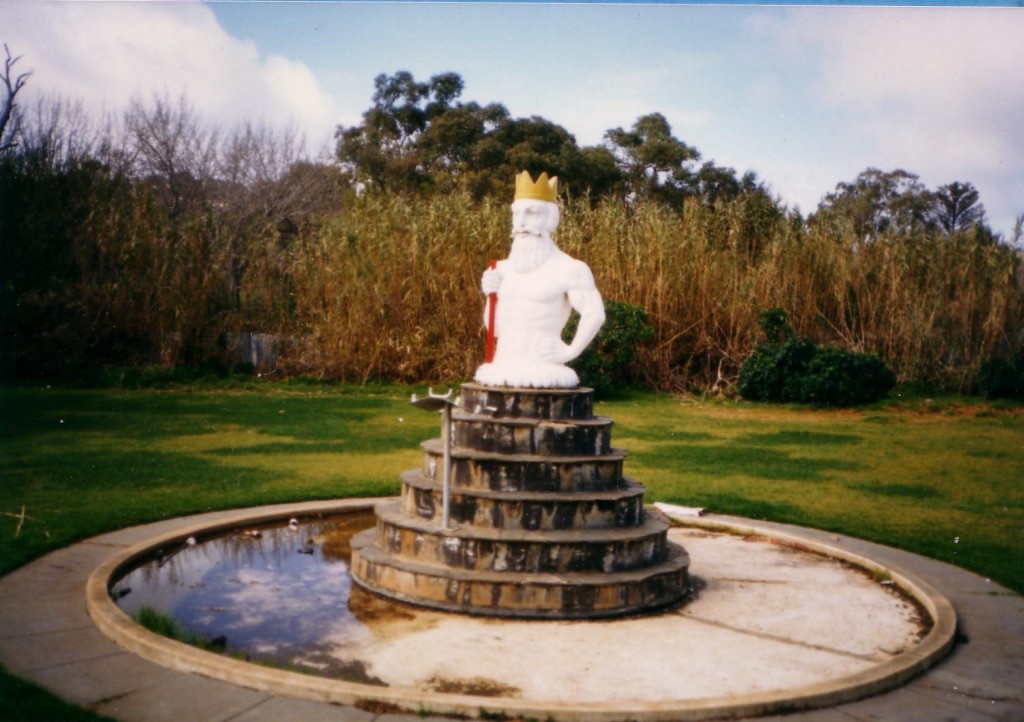 Photo of King Neptune in his original pond, comes from the personal collection of Suzanne Comelli, the daughter of Arturo who was the artisan who crafted Neptune from concrete, and 891 ABC Adelaide.

James Atkinson recalls; “In those days, trading in the ‘metropolitan area’ was restricted; Darlington was the last place you could purchase fuel with extended trading hours, from a number of oil companies including Neptune, Shell, Mobil, Amoco, Caltex, Ampol, BP, Esso. There was competition of proprietors as to who was ‘King of the Golden Mile’, so I think this led to the construction of ‘King Neptune’, on a lawn verge of Sturt Creek, adjacent to the ‘Neptune’ service station.

Late last year we also had a post on King Neptune and one of those who posted a comment was Kathryn Hearn who wrote; “My father was the proprietor of the Neptune Service Station and he was responsible for King Neptune’s creation. When the Station was demolished to make way for Mc Donald’s, I was told that he had been moved to some where at Birkenhead. I don’t know exactly where, but that’s the last I heard of him. Its good to know that he left a lasting impression on people”. 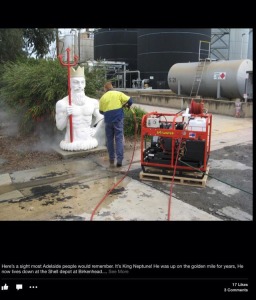 Scott Bigharvs’ photo; Well you asked .. Here he is in his current form! Check out Spit Water pressure cleaners page.

He did indeed Kathryn. Scott Bigharvs posted that King Neptune is living down at the Shell Bitumem depot Elder Rd Birkenhead, and the guys are taking really good care of him. Shell apparently took over Neptune and the king went into storage for quite a while but is now stationed at the gate entrance to the depot.

Lance Sturtzel remembers it quite clearly. “The first petrol station on the left as you got into the Darlington petrol stations was Neptune and there he stood, in the middle of a pond of water”! Christopher Dabovich added “Yep, down by Sturt River Caravan Park, actually it was east of South Road, just next to, or where McDonalds is now” and Graham Eariss remembered him “just after you crossed the Sturt river and just before the row of service stations on South Road heading south”.

I always find it fascinating, the seemingly unimportant, little things we remember from our childhood and teenage years, even unimportant at the time but yet etched indellibly in our memories and as soon as you see an old photo or are reminded in some way, a hundred memories come flooding back!  Sweet memories perhaps from more innocent times.

11 Responses to When King Neptune Lived at Darlington