By Bob Byrne on October 25, 2014 in People and Personalities

Remember coming home from school to watch The Curiosity Show on Channel 9?

The Curiosity Show was an educational children’s TV programme made here in Adelaide and produced from 1972 to 1990. 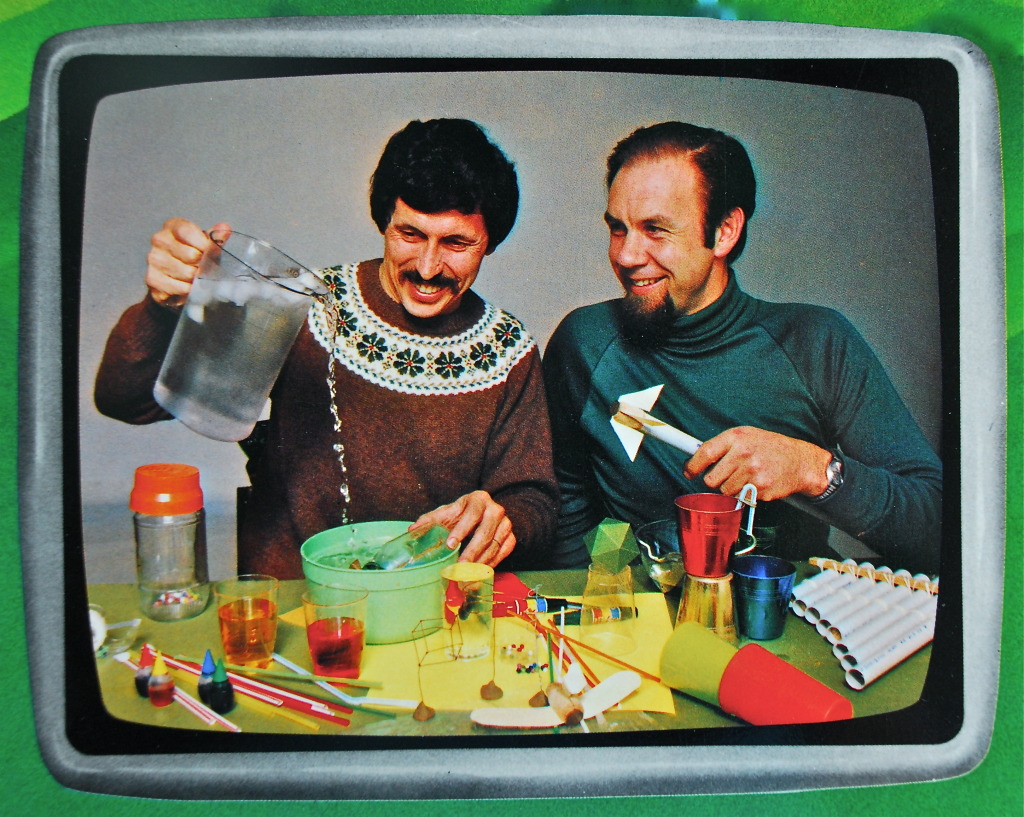 Photo from The Curiosity Show. The programme introduced children to science, using do-it-yourself experiments with household items like matchsticks, rubber bands and cardboard.

It was hosted by zoologist Rob Morrison and scientist Deane Hutton and the formula was simple; introduce children to science, using do-it-yourself experiments with household items like matchsticks, rubber bands and cardboard.

The accent was on science and placed a strong emphasis on showing practical demonstrations of various scientific topics, which included things like, floating a ping pong ball on a stream of air, setting off a room full of mouse traps, recreating historical devices, the science of musical instruments and freezing objects with liquid nitrogen.

Many of the segments presented scientific concepts in the form of tricks and puzzles.

There was often a “here’s one I prepared earlier” segment, with many of the experiments describing a sequence of steps to build something out of common household materials, and then producing the finished product.

Deane Hutton’s catchphrase, after presenting a hypothesis he’d postulated to the audience was to declare “well, I’m glad you asked,” before finally responding to the hypothesis.

The use of household materials was deliberate, in order to demystify science and ensure that children, wherever they lived, could make what they needed rather than rely on buying it, and this proved popular with the young audience who could easily replicate the demonstrations at home.

In 2013, Deane Hutton and Rob Morrison, announced they had purchased the remaining rights to the show for an undisclosed sum, and later that year they launched a You Tube channel to make the episodes and segments available again, this time for a new and younger generation of viewers.

You can watch the episodes here; https://www.youtube.com/user/CuriosityShow

As Deane remarked at the time “Everyone wants to know what’s happening, why things are occurring and how things work – these are questions kids ask from a very early age, and we were trying to tap into that.”

“I think we showed them that science wasn’t just something that happened in a laboratory, it happened at home and young people could get involved.”

Pre 90s of course there were many local programmes still being made in Adelaide. These days most shows are produced in the eastern states with bigger budgets, bigger stages, bigger stars but unfortunately, not necessarily bigger audiences.

What are some of your memories of The Curiosity Show?